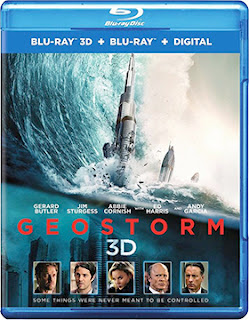 Warner Bros. Home Entertainment has tagged Jan. 23 as the street date for a three-SKU presentation of writer/director Dean Devlin’s Geostorm.

The troubled production (delays and re-shoots) arrives with an ARR of 95 days and domestic ticket sales — for this sci-fi tale about the hijacking of a weather safeguard satellite network — were on the disappointing side with just $34.3 million in domestic ticket sales.

Planned for release are a stand-alone DVD editions and two Blu-ray SKUs — one as Blu-ray/DVD Combo Pack and the second as a double-disc Blu-ray presentation featuring both 3D and 2D viewing options.

While Geostorm might not have been the sci-fi thriller that the studio first envision back in 2014, it should do reasonably well in the home entertainment marketplace … and when you look at Warner Bros. Home Entertainment’s January line-up, they should dominate the month — Stephen King’s It on Jan. 9 and Blade Runner 2049 on Jan. 16.

As to special features, common to all SKUs in the featurette titled “Search for Answers.”   Exclusive to the Blu-ray configurations are two additional featurettes — “Wreaking Havoc” and “An International Event.”