Icarus Films Looks To Feb. 12 For The Domestic DVD Debut Of Director Pierre Godeau's Down By Love 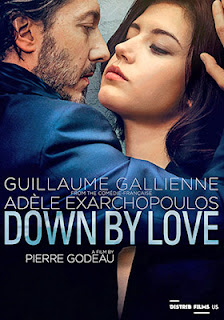 Women-in-prison is a whole film sub-genre onto itself.   Usually it’s sexual fantasies run rampant with lots of action and plenty of flesh.

But what happens when you pluck a story from real-life events, throw in a French twist, with a sultry star played by two-time Cannes Film Festival-winner, Adèle Exarchopoulos (Blue Is the Warmest Color, I Used to Be Darker) and with direction by Pierre Godeau (Juliette), who also adapted the tell-all by Florent Gonçalves and Catherine Siguret, “Défense D'Aimer?”

You get the Distrib Films production of Down by Love, which will be making its domestic DVD debut on Feb. 12 courtesy of Icarus Films.

Anna (Adèle Exarchopoulos) is a female prisoner, whose crimes we are not initially privy to (in real-life she was “the bait” for a gang of kidnappers and murders known as Les Barbares).   She ends up an adult prison run by 40ish warden by the name of Jean Firmino (Guillaume Gallienne — Yves Saint Laurent, Me, Myself and Mum, etc.), who is happily married, with a child and is roughly twice Anna’s age.

Seductive young woman and prison warden … with a French twist.   The simple infatuation turns to an affair and the chances taken escalate to the point where watching the events unfold literally make you squirm in your seat!   What a delight!

The film had a very, very brief arthouse run back in 2016, so Down by Love is virtually unseen by American audiences.   Put it on your Feb. 12 home entertainment viewing list … you will not be disappointed!

Down by Love is presented in French with English subtitles. 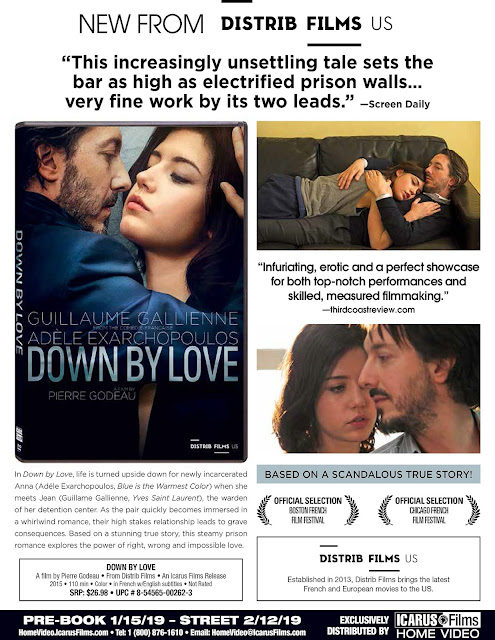 Email ThisBlogThis!Share to TwitterShare to FacebookShare to Pinterest
Labels: DVD and Blu-ray Release Report, Icarus Films Looks To Feb. 12 For The Domestic DVD Debut Of Director Pierre Godeau's Down By Love