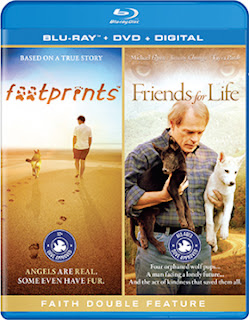 Mill Creek Entertainment announced its first wave of priced-to-collect Blu-ray and DVD product offerings for the month of March, 2019.

Included in this priced to collect Combo Pack is director Jim Huggins’ heartfelt — and true-life — tale of a broken man named David (Chris Faherty) who encounters a homeless and abused German Shepherd and they become friends … each healing the other in turn.

The film is titled Footprints and is based on actual events … seven of the dogs used in the film were rescued animals and Huggins production was entire funded by volunteers (some 500 people participated in the production of the film). 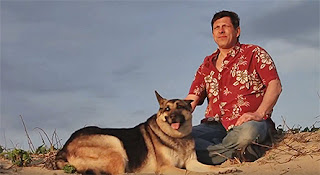 Teamed with it is director Michael Spence’s 2008 orphaned-wolves story, Friends for Life.   Jim (Michael Flynn) has just lost his wife and is in deep despair.  In something of a miracle, he is visited by an angel (played by Jimmy Chunga), who opens his eyes to a world around him that is full of beauty … a world of wonder that he has all but ignored. 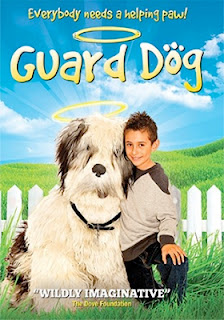 He soon discovers a wolf nursing four cubs and comes to her aid, but tragedy strikes and he suddenly finds himself father to the cubs … this “fatherhood” will once again bring meaning to his life.

Chance Watson (Oscar Limon-Zarzosa) is a nine-old kid who is acting out after the death of his mother.   He lies, he’s flunking at school and stealing things has become a habit, but then he is visited by a sheepdog, a magical dog, who can talk!   The dog tells him that Chance’s dreams will come true if he follows the rules and changes his ways … and soon enough he goes from brat to A-student, who helps those around him.   But is the dog real?   Has Chance gone off the deep end? 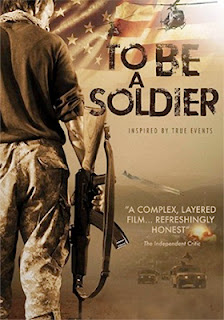 Following in the theme of faith-based films, and also making its DVD debut on Mar. 5, is director Adam Dufour’s film festival award-winner and recipient of the Dove Foundation's Seal of Approval, To be a Soldier, which is inspired by actual events.

Gregory Kirk (Jacob Dufour — Saving Faith, The Redemption of Benjamin Black) is a British insurance salesman whose sister has gone missing in the Middle East.   He is ill-equipped to go looking for her, especially if his worst fears are realized … she may have willingly joined ISIS.   He decides to pose as a journalist and then recruits a broken-down ex-Army Ranger by the name of Bryce (T.L. Bridger) to aid in his mission.

It may well be a suicide mission, but off they go, encountering terrorists and extreme conditions along the way.   To be a Soldier is in many ways a tale of redemption and somewhat unexpected in its delivery, especially for a Dove Foundation promoted film.