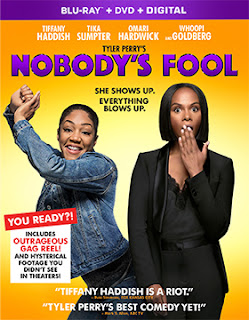 The ARR is 102 days and multiplex revenues were a toasty 31.7 million.

Danica (Tika Sumpter — Ride Along), a successful young woman with a nice home, on the fast track to be the first black female VP at her company and enjoying a (seemingly) wonderful online flirtation, has a wrench thrown into her perfect life plans when her “wild child” sister Tanya (Tiffany Haddish — Girls Trip) gets out of jail and needs a place to crash.

That’s the base premise of Tyler Perry's Nobody's Fool, and that would have been perfectly fine for a few laughs.   But the plot goes further than your typical, polar opposite comedy clash, when Tanya discovers that Danica’s online relationship may be HIGHLY suspect … and impactful on the rest of her life.  A fresh-out-of-prison sister is not one to mess with.

You can often tell how beloved a comedy is by the amount of bonus work that goes into the home entertainment releases …  more than an hour of extras here. An introduction by Tyler Perry and Haddish kicks things off, followed by more than 20 minutes’ worth of deleted, extended and alternate scenes that didn’t make the theatrical cut.

After checking out the gag reel, nine (NINE!) featurettes await: “Tale of Two Sisters,” “The Legend and the Star,” “Mocha Latte Extra Laughs,” “I’m Just Trusting Tyler Perry,” “She Ready or Not: Here Comes the Wedding Crasher,” “Bring the Funny,” “Breakfast with Tiffany,” and the fake commercials “’Something New From Tyler Perry’ Perfume” and “’Catfished’ Perfume with Outtakes.” 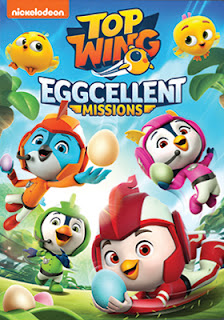 In other home entertainment release news this week from Paramount Home Media, we find that Nickelodeon Home Entertainment production of Top Wing: Eggcellent Missions will be landing on DVD this coming Mar. 5.

Eight amazing Top Wing stories are included in this fun-filled collection of animated adventures.  Sandy Stork mixes up new egg deliveries … can the mix-up be un-mixed before the eggs hatch???

And what happens with Baddy McBat takes the Flash Wing jet with little Cheep and Chirp inside?   There is more, much more, including Rod’s singing talents (loud and louder) getting him into avalanche trouble!!!
So come join the fun on Mar. 5 when Top Wing: Eggcellent Missions arrives on DVD!