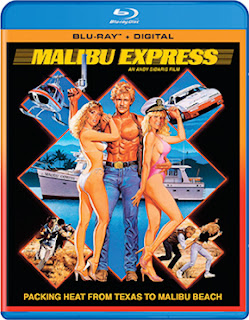 Sidaris, who found fame as the director of Wide World of Sports (and the use of his audience-pleasing “Honey Shot”) always found a way to combine solid action storylines with the allure of former Penthouse and Playboy centerfolds, a combination that found a loyal film audience and over the years earned him something of a cult following.

Both of these new film restorations will be available as Blu-ray releases on Apr. 16 and both SKUs include Digital Copy.

First up is his 1985 film release of Malibu Express, which finds private investigator Cody Abilene (Darby Hinton — former child actor who starred as Israel Boone in Fess Parker’s hit TV series of the 1960s, Daniel Boone, plus such films as Without Warning, Angels' Brigade, Black Oak Conspiracy, etc.) being “interviewed” by the Contessa Luciana (played by none other than Sybil Danning — Naughty Nymphs, as Eugenie in The Three Musketeers and The Four Musketeers: Milady's Revenge, The Concorde ... Airport '79, Chained Heat and in the same year as Malibu Express she starred as Stirba in Howling II: ... Your Sister Is a Werewolf) and when he meets her “standards” he is hired to investigate the Chamberlain family.

Seems like a simple enough assignment, but it gets complicated very quickly when Lady Lillian Chamberlain’s (Niki Dantine) household ends up being the center of Russian spy activity, among other things.   Cody needs to take plenty of time to “investigate” Lady Lillian’s daughter, Anita (Shelley Taylor Morgan — My Tutor, Scarface, etc.), the niece, (played by Playboy’s “Playmate of the Month,” Lorraine Michaels) and her fetish-inspired husband … and keep a sharp eye out for the “muscle,” the family’s chauffer, Shane (Brett Baxter Clark ­— Bachelor Party, Eye of the Eagle, etc.). 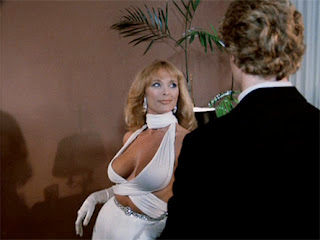 Malibu Express (which, by the way, is the name of Cody’s boat … which also sees plenty of “action”) delivers at all levels … action, fun (some great gags) and plenty of “eye candy.”   The plot is a more of a mechanism to move things along than a mystery that actually has to be solved by Cody!!

Bonus features include a first-time HD widescreen presentation of the film, a vintage introduction by the late Andy Sidaris and 40-minutes worth of behind-the-scenes featurettes (which are worth a look-see on their own “merits). 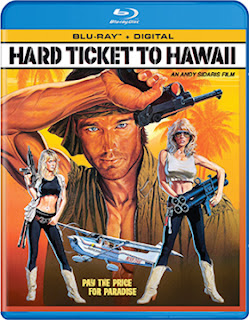 Next in line, chronologically speaking in filmmaker Andy Sidaris’ famed “Bullets, Bombs and Babes” or “Girls, Guns and G-Strings” series of cult action films, is the spring of 1987 film release of Hard Ticket To Hawaii.

Something sinister is happening on the Hawaiian island of Moloka‘i … it seems that drug lord Seth Romero (Rodrigo Obregon) has plans to flood the islands with drugs and use his diamond smuggling operation to finance the scheme.

The first two DEA agents dispatched to investigate were murdered by Romero and his henchmen, so bombshells Donna (Playmate Dona Spier — Savage Beach, Picasso Trigger, etc.) and Taryn (Playmate Hope Marie Carlton — Slumber Party Massacre III, Terminal Exposure, etc.) go undercover to crack the case.  They are transport pilots … who can actually fly planes and are not afraid of hauling some very deadly cargo.  Oh, and passengers too. 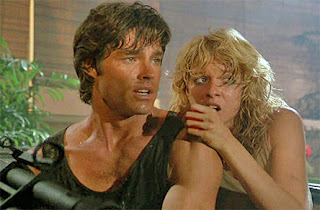 During one of these flights they uncover a stash of Romero’s diamonds and all hell breaks loose.   Soon fellow agents Rowdy Abilene (played by The Bold and the Beautiful’s Ronn Moss … 25 years on the soap as Ridge Forrester from 1987 through 2012) and Jade (Harold Diamond — Rambo III) are dispatched to help the ladies and bring Romero to justice!   The “action” is non-stop!!

Bonus features for Hard Ticket to Hawaii include a HD widescreen presentation of the film, an introduction by Sidaris’ and vintage behind-the-scenes featurettes.