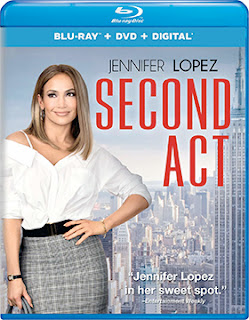 Universal Pictures Home Entertainment and STX Entertainment will be teaming up on Mar. 26 for the home entertainment launch of director Peter Segal’s romantic comedy, Second Act, starring and produced by Jennifer Lopez.

The ARR for this Christmas Holiday theatrical entry is 95 days and box office receipts came in at $37.8 million.  Planned for release are a Blu-ray/DVD Combo Pack and a stand-alone DVD edition.

Jennifer Lopez plays a long-surfacing Queens’ retail employee who has “street smarts,” but lacks the formal education to escape her dead end job.   She suddenly finds herself re-invented into a savvy consultant (well, with a little help from her godson … and friends) and lands a high profile gig with a Manhattan company run by Anderson Clarke (Treat Williams).

It becomes a race against the clock.   Can she launch a new product — in competition with Clarke’s daughter, Zoe (Vanessa Hudgens) — before her fraud is exposed.

Bonus features include four featurettes — “Connecting with Milo Ventimiglia,” “The Empowering Women of Second Act,” “Friendship On and Off Screen” and  “Working with the Ones You Love.”

They can’t all be hits … the money is spent, the visuals are spectacular, but the audience was a no-show and that means red ink.   Such was the case with director Christian Rivers’ film adaptation of the Philip Reeve's post-apocalyptic novel, Mortal Engines. 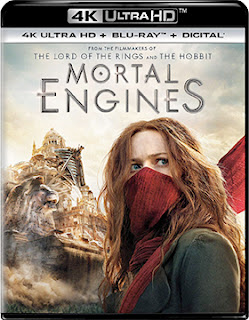 Universal Pictures Home Entertainment announced this past week that a three-SKU selection of home entertainment packaged media products for Mortal Engines will be available on Mar. 12.   That date yields an ARR of 88 days … the Christmas-season theatrical launched yielded dismal ticket sales of just $15.9 million (trades were reporting a production budget somewhere north of $100 million).

It will be home entertainment to the rescue to salvage what they can with Combo Pack editions for both 4K Ultra HD (with Blu-ray) and Blu-ray (with DVD), plus a stand-alone DVD SKU.

Bonus features include commentary from Christian Rivers and five featurettes — “Welcome to London” (a five-part “behind-the-scenes” presentation), “End of the Ancients,” “Character Series,” “In the Air” and “Film New Zealand.”