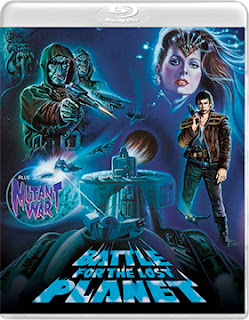 Last week we covered the film restorations from Vinegar Syndrome that will be streeting on on Jan. 29.   In addition to director Richard W. Haines’ slasher classic, Splatter University and director Lee Frost’s adult treasure from 1974, A Climax of Blue Power, Vinegar Syndrome had a pair of vintage direct-to-video releases that have stood the test of time — writer/director Rolfe Kanefsky’s There's Nothing Out There (1991) and writer/director Greydon Clark’s Uninvited (1988).

In keeping with that spirit, Vinegar Syndrome announced it February line-up (all available as Blu-ray/DVD Combo Packs on Feb. 26) of new film restorations this past week and at the top of the list is the double-feature presentation of Brett Piper’s direct-to-video sci-fi gems from the 1980s, Battle for the Lost Planet and its sequel, Mutant War.   Both are 2K restorations from 16mm and 35mm camera negatives.

Let’s just say it right up front, Battle for the Lost Planet (aka: Galaxy Destroyer) is cheese … a low-budget mish-mash, with some questionable acting and a sappy script, but it has some really, really cool stop-motion and in-camera special effects sequences (something that Piper has mastered over the years … check out Queen Crab).

And those sequences make this a keeper, especially when the Battle for the Lost Planet is teamed with Mutant War, the sequel which continues the quest of Harry Trent (Matt Mitler — Basket Case 2, Cracking Up) to unite the surviving humans, overcome mutant creatures and drive the alien invaders from Earth. 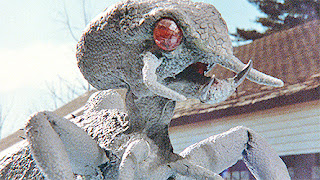 Bonus features include an introduction by filmmaker Brett Piper to both films and featurette titled “Battle for the Lost Film.” 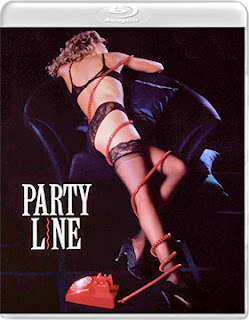 Richard Hatch plays “Dan” the detective out to stop them, while Shawn Weatherly is Stacy, an ambitious DA special investigator who is teamed with him … it is pretty obvious from the get-go that Angelina is smarter than them all, so catching her is no easy task.

Party Line is a slick (sick) little thriller — a very limited release by Sony Pictures in October in 1988 — that allows Leif Garrett to be very strange (unhinged sexually) and Greta Blackburn to be both sexy and scary domineering in equal measures.

Also on the Feb. 26 release calendar as Blu-ray/DVD Combo Pack release (a 4K film restoration from the original 35mm camera negative) is another film from director Greydon Clark (see above), his 1982 horror spoof, Wacko. 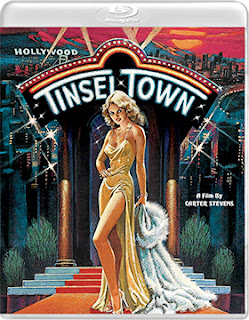 The lawnmower killer, a pervert and his daughter, Norman Bates over for dinner with his mom, the high school prom and Andrew Dice Clay … do you real need any more than that to be talked into putting this rarely-seen gem on your viewing list come Feb. 26!!
Bonus features include commentary from filmmaker Greydon Clark, outtakes and the featurette titled “Die Laughing.”

Rounding out the February line-up from Vinegar Syndrome is adult filmmaker Carter Stevens’ “casting couch” expose, Tinseltown, starring Danielle Raye as innocent country girl Mary Jo Harmon who comes to Hollywood to fulfill her dreams and in turn gets a few lessons in how the entertainment business really works.

This is a 2K film restoration from the original 35mm negative (yes, shot on film) and it includes a newly-prepared commentary option from director Carter Stevens.