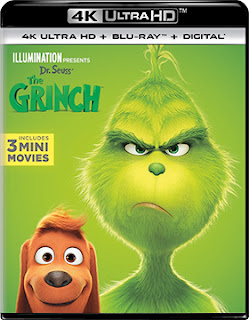 Tabbed for a Feb. 5 launch, the ARR works out to a swift-to-market 88 days.   Ticket sales generated during the year-end holiday period were outstanding at $269.6 million.

As to bonus goodies, Dr. Seuss' The Grinch ups the merriment with not one, but three new animated “mini-movies” — Yellow is the New Black, Dog Days of Winter and Santa's Little Helpers — ten production featurettes — “The Making of the Mini-Movies,” “From Green to Screen,” “Illuminating the Grinch,” “My Earliest Grinch Memories,” “Grinchy Gadgets,” “Songs From His Little Heart,” “X-mas Around the World,” “Cindy-Lou's Yule Log,” “Production Babies” and “Any Who Can Draw” — and the lyric video titled “I Am The Grinch.”

Also on the way from Universal Pictures Home Entertainment, with the official announcement coming hot on the heels of the Golden Globes telecast, is the Mar. 5 home entertainment debut of writer/director Peter Farrelly’s Green Book.

The ARR is 109 days and the domestic box office tally currently stands at $35.2 million — the surprise Golden Globe win will likely renew interest in the film and push that number higher on the run-up to the Oscar nominations on Jan. 22. 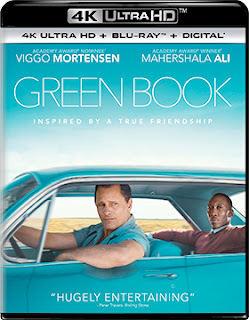 Planned for release are Combo Packs for both the Blu-ray and 4K Ultra HD formats, plus a stand-alone DVD edition.

No sooner did the Green Book win Best Comedy or Musical (which is odd, since it is actually a bio-drama) at the Golden Globes (upsetting the front-runner, A Star is Born) when a seemingly well-organized smear campaign sprung up.  Viggo Mortensen was accused of being a racist, distant relatives of “Doc” Don Shirley (played by Mahershala Ali) suddenly materialized and claimed that the story was not accurate and that somehow the entire film was anti-Muslim.   Really?

The fact is, in a weak year for a clear-cut frontrunner for Best Picture, writer/director Peter Farrelly’s Green Book has suddenly emerged as the film to beat.   Sure, Disney/ABC will continue to insist that Black Panther is the Best Picture (they should work on getting a host for the telecast and forget about this “Best Picture” nonsense) and there is good reason to believe that writer/director Alfonso Cuarón’s Roma could be nominated in both the Best Picture and Best Foreign Language Film categories (writer/director Michael Haneke’s 58Amour was the most recent foreign language film to be nominated in both categories … winning for Best Foreign Language Film in 2012) … Roma could actually win both Oscars!

As to Green Book special features, these are limited to a trio of featurettes — “Virtuoso Performances,” “An Unforgettable Friendship” and “Going Beyond the Green Book.”