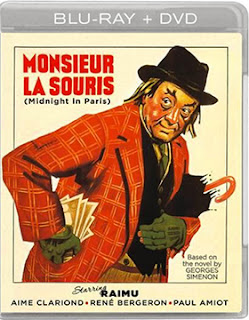 Adapted from the novel by prolific Belgian-born writer, Georges Simenon (who would gain fame for his series of Jules Maigret detective novels … some 75 in all) and starring Raimu (aka: Jules Auguste Muraire), a popular stage and screen actor of the 1930s and ‘40s (he died of heart failure from a minor operation in 1946), Monsieur La Souris is an odd little film in which filmmaker Georges Lacombe may have gotten away with a little bit of anti-Nazi propaganda.

Remember, the film opened theatrically in France in October of 1942, almost two full years before the Liberation of Paris in August of 1944, so filmmakers, writers, actors, etc., all had to tread lightly or end up on a train bound for a concentration camp.   Ironically, novelist Georges Simenon was both suspected of being a collaborator (nothing came of it, although he left France as soon as the war ended) and was investigated by the Gestapo at the same time. 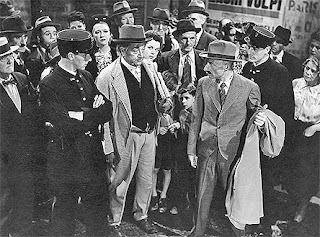 In any case, Raimu plays a street vagrant known as “La Souris” (The Mouse), who makes a few francs by doing odd jobs at a cabaret in Paris.   During one evening he stubbles onto a dead body behind the wheel of car, but before the police can be summoned, the automobile suddenly drives away … leaving behind an important clue, a wallet chockfull of money (plus other tidbits of information).

The police officials arrive — Commissioner Lucas (Paul Amiot — Madame Sans-Gêne, Orpheus, Queen's Necklace, etc.) and Inspector Lognon (René Bergeron — The Count of Monte Cristo, Remorques) — but The Mouse, detests these “authority” figures (remember, occupation of France, etc.) and launches his own investigation (common hero) of the murder.  Naturally, his sleuthing draws the attention of the inept Lucas and Lognon, who suspect that The Mouse might be in on it!!

Monsieur La Souris plays-out as a clever whodunit with enough twists and turns that would make Agatha Christie proud.   Presented in French with English subtitles, the Blu-ray/DVD Combo Pack release of Monsieur La Souris by Cinetrove International includes an extensive photo gallery and the featurette titled “The French Detective.” 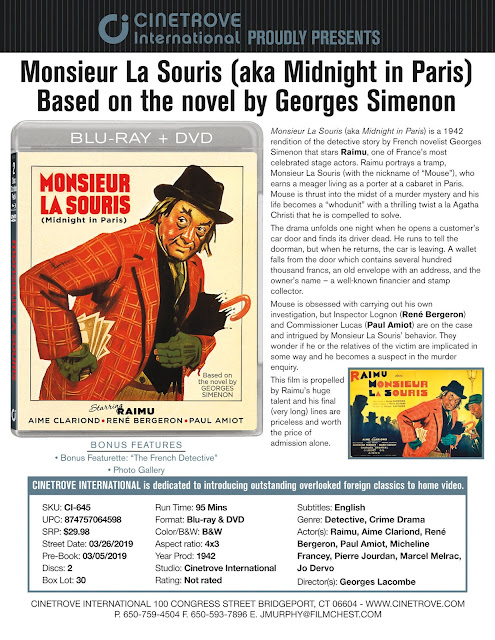