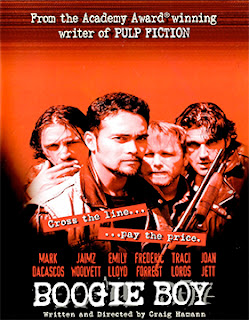 A 4K restoration from the original camera negative (supervised by filmmaker Craig Hamann) will be available a Special Edition Blu-ray/DVD Combo Pack on May 14.

Jesse Page (Dacascos) is a loser, he’d like to be a rocker (drummer), but somewhere along the way crime and stupid things piled up and landed him a jolt (or two) in prison.   He’s fresh out of the joint, but doesn’t seem to have much in the way of plans … future-looking sort of thing.

In any case, a former buddy from prison named Larry (Jaimz Woolvett — Unforgiven, Dead Presidents, Rites of Passage, etc.), drops by with a tasty bit of bait — a cycle — which works like a charm as Jesse, who says he wants to remain on the right side of the law, is quickly sucked in to a drug deal that, naturally, goes south.

On the run, the pair end up in a sleazy motel named, appropriately enough, The Lost Oasis.   The joint is run by a good natured fellow by the name of Edsel Dundee (played by none other than Frederic Forrest), who has a dim-bulb of a wife, Hester (another surprise, Emily Lloyd — A River Runs Through It, Wish You Were Here), who will eventually create enough sexual tension to get our boy Jesse into more trouble.

What makes Boogie Boy a real keeper — and certainly a prime Rewind Collection candidate — is the incredible cast that was assembled.   In addition to to Emily Lloyd and Frederic Forrest, the film features the likes of Traci Lords, scream queen Linnea Quigley and Joan Jett, playing a seedy rocker who takes a liking to Jesse and offers him a gig … if he can just get out of the mess that Larry has gotten him into.

A clever twist-ending, that was later used in one of the Breaking Bad episodes, also adds to the film’s cult-like status ... and on Blu-ray for first time!!   Put May 14 for this primo 4K presentation of Boogie Boy.

Bonus features, which are still being worked on, include extensive video sessions with the cast and crew and a newly-prepared making-of featurette. 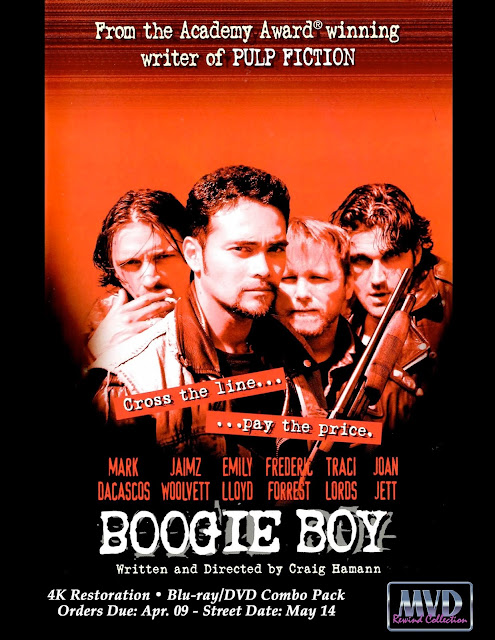