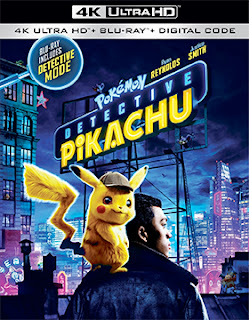 Satoshi Tajiri’s “Pocket Monsters” have been around in animated form since the late 1990s — over 20 films in one form or another, plus series — so it was only natural that a live-action Pokémon adventure would arrive some day.

This would be director Rob Letterman’s Pokémon Detective Pikachu and, judging from the domestic box office haul of $142 million (and roughly twice that overseas), it will not likely be the last (no official date of yet, but you can expect a franchise to be developed based on those numbers).

Warner Brothers Home Entertainment announced this past week that Pokémon Detective Pikachu, teaming wiseacre Ryan Reynolds as the voice of Detective Pikachu with Justice Smith (Paper Towns, Jurassic World: Fallen Kingdom) in a full-out action/mystery adventure, will be making the transition to the home entertainment packaged media marketplace on Aug. 6 as a three-SKU array of product selections.

For the record, the ARR for that early August street date works out to a swift-to-market 88 days.

Planned for release are a 4K Ultra HD/Blu-ray Combo Pack, a Blu-ray/DVD Combo Pack and a DVD edition.   Yes, yes, Target and Best Buy will have their own “exclusives.”

Bonus features, much of which appears to be tongue-in-cheek — in keeping with the tone of the movie itself — include “Detective Mode” (not quite sure what that might be), a “Mr. Mime's Audio Commentary,” an alternate opening, a five-part “Creating the World of Detective Pikachu” production documentary (segments are titled “Welcome to Ryme City,” “Uncovering the Magic,” “Action,” “Colorful Characters” and “Bringing Pokémon to Life”) and two additional featurettes — “My Pokémon Adventure” and “Ryan Reynolds: Outside the Actor’s Studio.”

And lastly, there is the Rita Ora and Kygo music video titled “Carry On.”