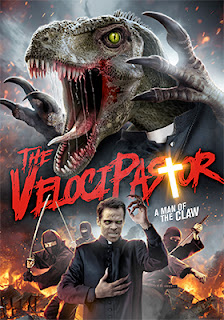 You mix genres and sometimes you get some pretty interesting, even hilarious, results.   Such is the case with writer/director Brendan Steere’s Aug. 13 DVD debut of The VelociPastor from Wild Eye Releasing — sales and distribution support provided by MVD Entertainment Group.

Yes, you read that right, “VelociPastor” … holy creation, what on earth are we dealing with here?   Let’s just say that we have elements of religion, ninjas, gang violence, a cute hooker, magic spells, a man of faith in crisis — “God, says a lot of people deserve to die” — and a killer Velociraptor all thrown together in what can best be described as an action/comedy with liberal doses of goofiness.

Sometimes you just need to take a break from all that super hero stuff and go a little downscale.  The VelociPastor fits the bill!  Come on, you know what we are talking about.  It can be bad, really bad … and it’s suppose to be and that’s the fun; the hoot of it!
Plot?  Don’t ask!   In short, we have Pastor Doug Jones (Greg Cohan), who has lost his parents, takes a trip to China, is empowered with the ability to transform himself into a killing machine (sure, you’ve seen Jurassic Park) and has been sleeping with a hooker by the name of Carol, played by Alyssa Kempinski (Heart of the Beast, Annex), who absolutely steals this movie. 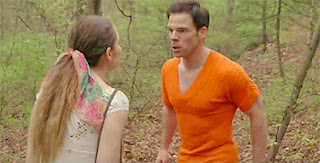 Indeed, if you are going make a film about a religious man, who has lost his faith, and has decided to not turn the other cheek, but fight back as a Velociraptor, then you need actors who can carry it off … filmmaker Brendan Steere (Animosity, Dead by Dawn) choices of Greg Cohan and Alyssa Kempinski is spot-on as they do their parts magnificently, especially Kempinski.   They are like Batman and Robin in dealing with the forces of evil … and dead serious about it!

As to bonus features, there is a gag reel (what irony, a gag reel in a movie titled The VelociPastor) and commentary from writer/director Brendan Steere. 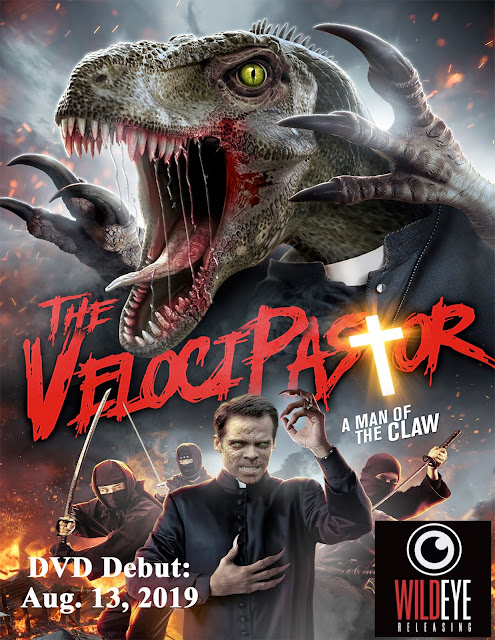