Paramount Home Media Picks Nov. 19 For The Release Of DVD And Blu-ray/DVD Combo Pack Editions Of Dora And The Lost City of Gold 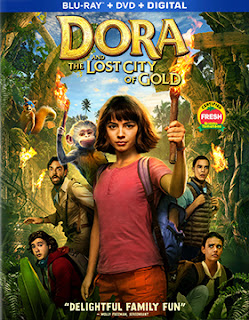 On the surface it sounds like a dumb idea.   We are talking about a live-action movie featuring Dora the Explorer, the star of the long-running Nickelodeon animated series for kids.

Director James Bobin’s Dora and the Lost City of Gold defied expectations and turned out to be a real audience pleaser, the success of which was largely propelled by word of mouth during its theatrical run.

Paramount Home Media announced this past week that on Nov. 19 consumers will be able to purchase either DVD or Blu-ray/DVD Combo Pack editions of this fun-filled action adventure.

The ARR for that date works out to 102 days and domestic turnstiles clicked to the tune of $59.4 in box office receipts. 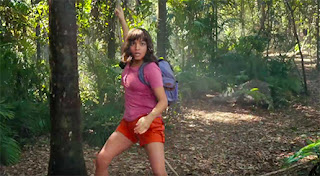 The key to Dora and the Lost City of Gold’s success was threefold.   First, the selection of a teenage Dora in the form of Isabela Moner (Instant Family, Sicario: Day of the Soldado, Transformers: The Last Knight, etc.) was inspired.   She gives Dora both a three-dimensional personality and a sense of fun, and yet still maintains the same look and feel of the perpetually young animated character (a six-year old version is played in early scenes by newcomer Madelyn Miranda). 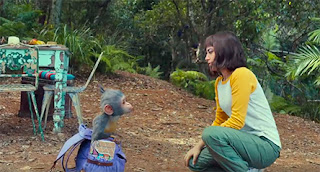 And third, Dora and the Lost City of Gold was presented in a style that would not be offensive to any parent wandering in with the little ones thinking that it would be Dora as her traditional “animated” explorer self.

Bonus goodies included a blooper reel, deleted and extended scenes and four featurettes — “All About Dora,” “Can You Say Pelicula?,” “Dora In Flower Vision” and “Dora's Jungle House.”

Email ThisBlogThis!Share to TwitterShare to FacebookShare to Pinterest
Labels: Paramount Home Media Picks Nov. 19 For The Release Of DVD And Blu-ray/DVD Combo Pack Editions Of Dora And The Lost City of Gold