Warner Bros. Home Entertainment Looks To Nov. 19 As The Street Date For DVD And Blu-ray Editions Of Writer/Director Gurinder Chadha’s Blinded By The Light 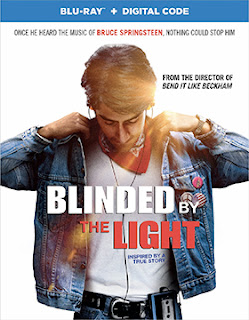 The ARR comes in at 95 days and box office receipts, despite the film’s positive critical reviews and audience raves, came in light at just $11.8 million.   Certainly the home entertainment launch in mid-November gives both Warner Bros. and reluctant audiences a second chance to catch the film.

Perhaps it was just one too many recording artist-themed movies in the space of one year that worked against the film — Bohemian Rhapsody, Rocketman and Yesterday — or, maybe it was the film’s subject matter.   Audiences can be tough to figure, especially during the summer months when the big-budget “blockbusters” hog the multiplex screens … failure to generate big bucks on the first Friday night can doom a film to a very short run.

In any case, the story follows the coming-of-age of Pakistan-born teenager Javed Khan (Viveik Kalra), now living in England with his more-traditional parents, who discovers the music of Bruce Springsteen and that discovery becomes something of a life-changing experience.   His path to becoming a writer and journalist is forged, but that creates some real conflict with his parents … and then there is the underlying tone of working class issues of racism and politics.

In other release news from Warner Bros. Home Entertainment, director Andrea Berloff’s crime drama, The Kitchen, will be heading home on Nov. 5 as both DVD and Blu-ray product offerings. 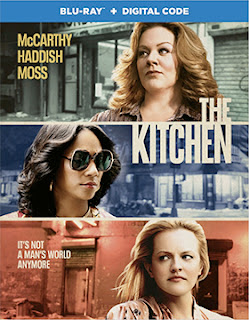 The ARR is 88 days and domestic ticket sales currently stand at $12.2 million.

This period piece (circa 1978) stars Melissa McCarthy, Tiffany Haddish and Elisabeth Moss are wives of members of the New York Irish mob who take over “the family business” (and all that goes with it) when their respective husbands end up in prison.   Things take a rather nasty turn when the boys get out of the clink and soon discover that it’s not personal, it’s business!!

Email ThisBlogThis!Share to TwitterShare to FacebookShare to Pinterest
Labels: Warner Bros. Home Entertainment Looks To Nov. 19 As The Street Date For DVD And Blu-ray Editions Of Writer/Director Gurinder Chadha’s Blinded By The Light