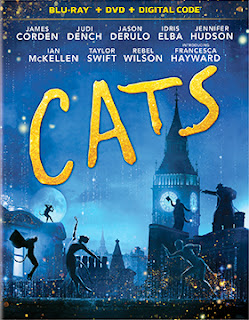 Lesson learned … just because you can do something, doesn’t mean that you should actually do it.

Director Tom Hooper, who won the Oscar for his direction of The King’s Speech, and delivered a marvelous version of Les Misérables, decided that loads and loads of CGI cat fur would somehow be a good thing in doing a theatrical version of the Andrew Lloyd Webber musical Cats.

It wasn’t … it was the stuff of nightmares, but it did give Ricky Gervais some great material for his Golden Globes opening monologue.

With this said, Universal Pictures Home Entertainment announced this past week that Cats will be heading home as both DVD and Blu-ray/DVD Combo Pack offerings on Apr. 7.

The ARR comes in 109 days and box office receipts in the domestic market finally clawed their way to $27.1 million.

As to bonus materials, director Tom Hooper provides commentary (that should be very interesting) and there are ten featurettes — “9 Lives: The Cast of Cats,” “Singing Live,” “Cat School,” “A Director's Journey,” “Making Music,” “The Art of Dance,” “Scaling Up,” “A Little Magic,” “The Dancers” and “Making Macavity.”