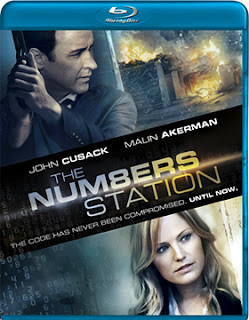 Who would have guessed that the simplest solution for passing out assignments to their operatives around the globe is being used by the stealthy CIA.

Why they just broadcast codes that translate into specific instructions out in the open — remember those random expressions used by the British during World War II to tip off the French underground: “The cheese has green mold.”   Same thing.

That’s the concept behind director Kasper Barfoed’s The Numbers Station, arriving on DVD and Blu-ray from Image Entertainment on May 28 (a small theatrical break is planned for the last weekend in April).

Emerson (John Cusack) is a long-serving CIA operative who badly bungles his latest assignment and should be heading for the exits, but is given a last chance to redeem himself with a seemingly simple assignment.   Just sit around and guard (ie: babysit) the code announcer (Malin Akerman — Stolen, Rock of Ages, Watchman, etc.) as the CIA’s secret station in England.  Boring!

Katherine (Akerman) just sits at a microphone and says stuff like “8 – 4 – 3 – 6 – 0” and things happen.   They claim that this has been the procedure since WWII … OK, we can get behind that, it is certainly no worse than her speaking into the mic and saying in her sexiest voice, “The cheese has green mold.” 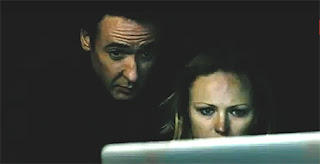 But our antenna go up almost immediately in this spy-on-spy thriller … veteran agent, bungled job and a face-saving meaningless assignment.   Hmmmm, that sure smells a lot like moldy cheese; it’s a set-up and Emerson is the patsy.   Sure enough that’s exactly what happens as their secret hideout comes under attack and he and his code announcer are suddenly in a fight for their lives!

No word on bonus features at this time.