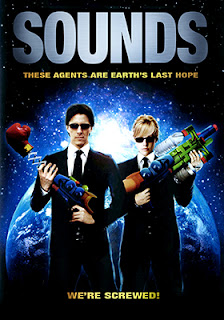 Writer/director Ryan Humphries’ sci-fi spoof, Sounds (aka: Sounds: Like Men in Black Chasing X-Files While Having a Close Encounter of the Wrong Kind!) will be heading to the home entertainment market place on June 25 with its DVD launch from Indican Pictures.

In a remote wooded area two couples have cozied up for a romantic weekend.  Just one problem, a meteorite has crashed to earth bringing an alien presence that could — maybe; possibly; with a luck — destroy mankind.   It’s The Blob meets Teenagers from Outer Space … and more.

One of the group, the alluring Rachel (Anna Pack), has been impregnated by the other world creature as is now host to what amounts to an egg farm — much worse than Alien or Aliens … or even Alien 3 (hard to image that anything could be worse than Alien 3).   She is now host to an ever-growing alien invasion … and is still cute (well, sort of ... if she's not wolfing up alien eggs).

No worries, the FBI is on the scene — Agent Styles (Richanne Baldridge) and Agent Miller (J. Peter Parker) — and the world will be saved.  Excuse us while we snicker, the world will not be saves, Styles and Miller are idiots and Rachel is now vomiting up eggs left and right.   You could run for your lives, but it would be a fruitless effort … the end times have arrived on planet Earth.

Only two things stand in the way of humanity’s total destruction — the Type 11 Second Stage Micron Focal Wave Generator or her boyfriend (who took her out to the remote cabin in the woods in the first place).   Hate to say this, but we really are doomed!