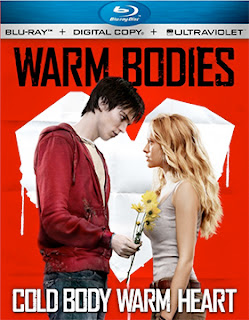 Not since Shaun of the Dead has there been a zombie movie quite like writer/director Jonathan Levine’s film adaptation of Isaac Marion’s novel of the same name, Warm Bodies.  This Summit Entertainment film production will be released as both DVD and Blu-ray product offerings (both SKUs include UltraViolet) on June 4 by Lionsgate Home Entertainment.

Bonus features include commentary from director Jonathon Levine (50/50, All the Boys Love Mandy Lane), who is joined by Zombie R (Nicholas Hoult — X-Men: First Class, Clash of the Titans, etc.) and Human Julie (Teresa Palmer — I Am Number Four, Take Me Home Tonight, etc.), plus there are deleted scenes, a gag reel and seven featurettes.