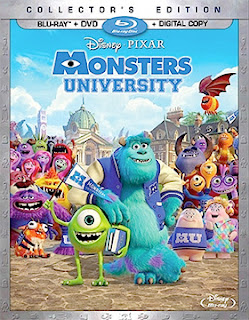 Literally speaking, the monsters are among us.   It is simply that time of the year!

The monsters that we are speaking of are of the cinematic kind as the “Hollywood” studios having been taking turns of late in selecting street dates for their summer blockbusters — post Labor Day street dates are the most lucrative.

So it is with Walt Disney Studios Home Entertainment’s announcement this past week that director Dan Scanlon’s animated smash, Monsters University (a prequel, if you well) will be settling in on Oct. 29 as a four-SKU product offering.

Planned for consumer buying options are a stand-along DVD release, plus three Blu-ray/DVD Combo Pack SKUs — one includes a 3D viewing option, while the other two are either with or without a Digital Copy bonus (premium for that is five bucks).