For additional information on this Artsploitation Films release: Click Here 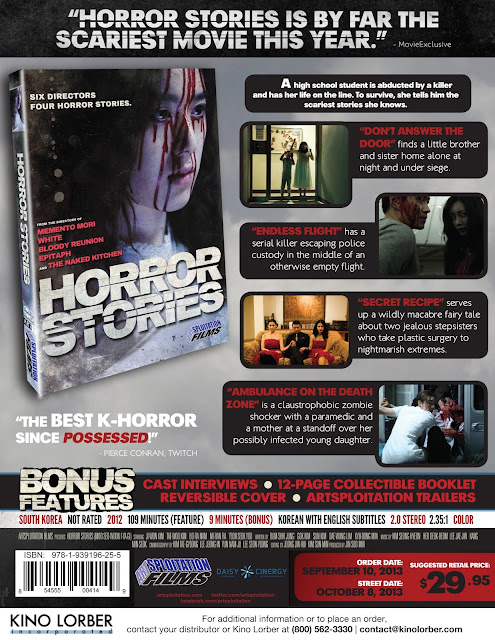 The venerable horror anthology gets a fresh look on Oct. 8 with Artsploitation Films delivers the South Korean film entry, Horror Stories.
Four separate stories from four different filmmakers are spun around the conceit of a beautiful high school girl (Kim Ji-won) being kidnapped by a crazed psycho (Yoo Yeon-seok) who cleverly forestalls what she believes to be the evitable — her rape and murder — by amusing her captor with tales of horror.
If you are a fan of those great horror anthologies of the 1970s — Asylum, The House That Dripped Blood, Tales From the Crypt, etc. — then you are going to feel right at home here.   Only, kick the violence, the blood and gore up a notch or two.
Min Kyu-dong handled the introduction and connecting segments, with filmmakers Jeong Beom-shik (Epitaph) delivering “Don’t Answer the Door” (two kids are left home alone with instructions not to answer the door); Yim Dae-woong “Endless Flight” (a serial killer with a captive audience); Hong Ji-young cooks up “The Secret Recipe” (an evil step-sister steals her sister’s groom much to her regret) and the filmmaking team of Kim Gok and Kim Sun takes us for a zombie plague ride in “The Ambulance.”