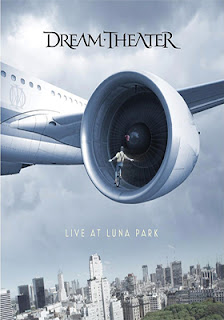 The progressive metal band Dream Theater has been at it for a quarter century now, and nobody other than Eagle Rock Entertainment would be capable of treating the band’s work like this.

On Nov. 5, Eagle Rock releases Dream Theater: Live At Luna Park on DVD, Blu-ray Disc and as a deluxe edition.  The performance from Luna Park Arena in Buenos Aires, Argentina (from August 2012, as part of the band’s “A Dramatic Tour Of Events” world tour) covers two nights in this concert presentation, with the centerpiece being the 160-minute main show (including the songs “Metropolis Pt. 1,” “The Silent Man,” “Pull Me Under,” “On The Backs Of Angels” and more).

Bonus features include a documentary, a behind-the-scenes featurette, a trailer, a cartoon intro, six multi-angle options for “Outcry,” and live versions of “These Walls,” “Build Me Up, Break Me Down,” “Caught In A Web,” “Wait For Sleep,” “Far From Heaven” and “Pull Me Under.”

Spring for the deluxe edition, and fans get the package in an 11.5-inch, square 60-page hardback photo book with the Blu-ray, two DVDs and three CDs, presenting all the physical formats in one release.