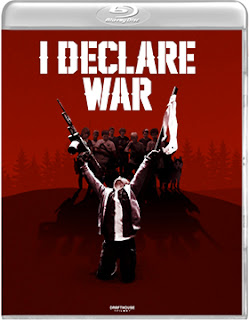 The film directing team of Jason Lapeyre and Robert Wilson will see their award-winning film festival hit, I Declare War, reach a much broader audience on Nov. 12 when Image Entertainment releases both DVD and Blu-ray editions.

A limited theatrical break — to further raise awareness — is planned for the Labor Day weekend.

At one level this seems like a story about a kid’s game — just a bunch of pre-teens playing Capture the Flag in the nearby woods; passing adults would see little more than that.   But locked in the telling of the story is a much deeper fable about the transition from a child’s fantasy playground to the world of an adult.

The rules are simple and they are honored.   But one day one of the players breaks from the tried and tested routine of the game and escalates the action to another level.   He gets caught-up in the game … much like adults getting lost in the winning and losing of life’s own battles (metaphors abound). 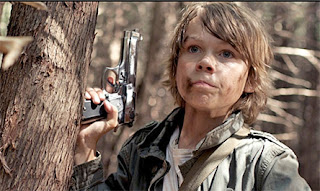 Despite the chaos that follows, we are given a sense from the filmmakers that unlike the boys in Lord of the Flies, this day will end, the reality of life will kick in once again and everyone will go home to dinner … perhaps a little worse for wear.   But you never know.

Bonus features include two separate commentary options, both featuring filmmakers Wilson and Lapeyre — one with and one without the child actors from the film — and the featurette titled “I Declare War.”