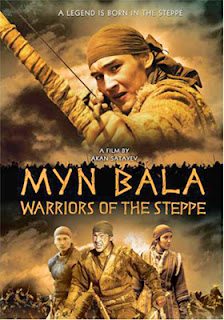 Nov. 26 will be the street date for director Akan Satayev’s epic tale of the birth of Kazakhstan, Myn Bala: Warriors of the Steppe.   This film was Kazakhstan’s official entry for last year’s Academy Awards and is something of a Kazakh phenomenon — what is on the screen, if produced by a Hollywood-based production company, would have cost ten times what the actual budget (a national labor of love) turned out to be.

The story centers around the unlikely 1729 defeat of the far superior forces of the invading Dzungars (Zunghar Khanate) by a rag-tag force of young Kazakhs lead by a teenager named Sartay (Asylkhan Tolepov).   As with William Wallace of Braveheart fame, Sartay’s name represents Kazakh independence to this day (despite over 100 years of Russian and Soviet occupation).

On Nov. 12 Virgil Films & Entertainment will release documentary filmmaker Todd Kellstein’s Buffalo Girls, a harrowing look at the underground world of Thai boxing … not that of adults, but of young girls who are recruited to the world of Muay Thai prizefights to earn money for their families. 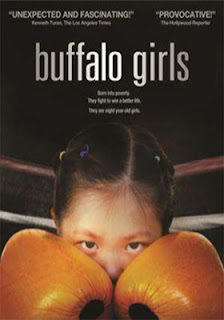 Kellstein’s film focuses on the lives of two eight year-old girls — out of some 30,000 children who fight in the rings of rural Thailand, often without head gear and formal training.   In the case of sisters Stam and Pet, they have professional training, rigorous workouts and fight for both the money and the pride of it; of being a “professional.”

The film doesn’t judge — in a Western sense — but shows the harsh realities of being born to poverty in the remote regions of Thailand.   Endless toil in the farming communities, the prospects of being sold off to the sex trade or fight, these are often the only options young girls in these villages have … the film is shocking, intense and yet both insightful and fascinating.