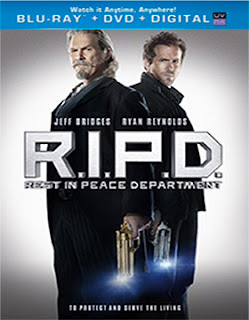 Director Robert Schwentke’s clever film riff on the “undead,” R.I.P.D., will be getting a three-SKU launch from Universal Studios Home Entertainment that is timed for Halloween viewing fun this coming Oct. 29.   The ARR for that street date works out to 102 days and the domestic box office take was $32.7 million.

This action comedy (a buddy film) teams Jeff Bridges with Ryan Reynolds as deceased lawmen — now part of the Rest In Peace Department — whose first assignment is to bring Reynolds’ murderer to justice.