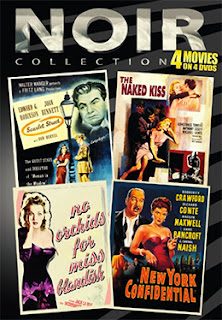 VCI Entertainment announced this past week a pair of four-film collections for delivery on DVD this coming Aug. 18.

First up is Noir Collection, which kicks off with director Russell Rouse’s 1955 mob thriller, New York Confidential, starring Broderick Crawford as Charlie Lupo, a dealer in death and the head of the New York operation of a nationwide crime operation — aka: the syndicate.   His main henchmen is Arnie Wendler (Mike Mazurki), but when a hit goes south out of town muscle Nick Magellan (Richard Conte) is given the assignment by Lupo to clean up the mess.

With rats turning on rats, Arnie decides to sing like a canary before Nick can turn out his lights.   That’s bad for Lupo, the other bosses don’t like squealers, so Nick gets a new assignment ... and we all know that loose ends will be cut by the film’s final fade.

Anne Bancroft co-stars as Lupo’s daughter, who meets a deadly end herself.

Next up is director Samuel Fuller’s 1964 neo noir The Naked Kiss, starring Constance Towers as Kelly, a reformed hooker, who has a dreamy courtship with the wealthy J.L. Grant (played by Michael Dante), only to discover a secret so terrible that she kills him.   Anthony Eisley as the local police chief, a one-time lover, and best friend of her victim … it looks like death row for poor Kelly if she can’t expose Grant’s filthy secret. 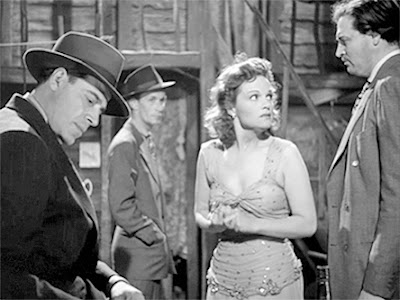 Director St. John L. Clowes’ No Orchids for Miss Blandish is a 1948 British import that stars Linden Travers (The Lady Vanishes, The Stars Look Down) as Miss Blandish, the heir to a massive fortune, who is the victim of a robbery gone wrong that quickly escalades into multiple murders and a clash between rival gangs over her kidnap ransom.

She is to be murdered and the money collected anyway, but she falls in love with one of the gang members — Slim Grisson (Jack La Rue — Paper Bullets, Dangerous Passage, etc.) — and the two plan their getaway.   It all ends badly.

And the last entry in VCI Entertainment’s Noir Collection is director Fritz Lang’s 1948 film noir gem, Scarlet Street, starring Edward G. Robinson as Christopher Cross a milquetoast cashier and would-be artist who is stuck in a loveless marriage.   When he meets Kitty (Joan Bennett), a hooker, his life quickly spirals out of control.

The other four-film collection on VCI Entertainment’s Aug. 18 release calendar is the Dirk Bogarde Collection, Volume 2.

Included in the set are: Once a Jolly Swagman (aka: Maniacs on Wheels — 1949, directed by Jack Lee featuring post-war motorcycle racing in England), Boys in Brown (1949, directed by Montgomery Tully, an early forerunner to The Loneliness of the Long Distance Runner) Hunted (aka: The Stranger in Between — 1952, directed by Charles Crichton) and Dear. Mr. Prohack (1949, comedy directed by Thornton Freeland).