Wild Eye Releasing Sets Loose A Plague So Pleasant On DVD On Aug. 25 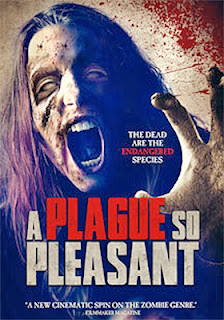 Indie filmmakers Benjamin Roberds and Jordan Reyes have clearly seen their share of zombie-themed thrillers.   So their vision of the aftermath of a zombie plague touches all the right bases (think: Night of the Living Dead), but then takes our undead “friends” down a very different rabbit hole.

Their film, A Plague So Pleasant, will be making its way to DVD on Aug. 25 courtesy of Wild Eye Releasing, with sales and distribution expertise provided by MVD Entertainment Group.

A year has passed since the world faced a zombie apocalypse, hundreds of millions died in a World War Z-like conflict.   But then something amazing happened, the human survivors discovered that if they simply let their undead brethren alone, the zombies would simply shuffle along peacefully.

It’s not exactly kumbaya time, but life — and undead-life — has sort of returned to normal.   Clay (David Chandler) understands that the carnage has stopped, but he’s not happy with this zombie co-existence, especially since his sister Mia (Eva Boehnke) is seemingly obsessed with an on-going relationship with her undead boyfriend.

What to do, what to do … a violent intervention could set anew the zombie apocalypse, but visions of Mia and her blood-drooling lover might be too much for Clay to deal with.   Armageddon or peace, the world is clearly at a crossroads in A Plague So Pleasant. 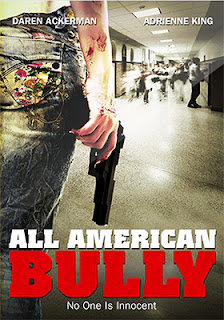 Also on the release calendar from Wild Eye Releasing is the June 23 DVD release of writer/director Jason Hawkins’ All American Bully.

John Brooks (Daren Ackerman) roams the school hallways looking for easy targets.   Geeks are easy to push around and one such member of this high school “tribe” is Devon (Alexander Fraser), who runs afoul of John and his minions and takes a beating for it.

That’s the least of it, while knocking him around they also forced Devon to do a video about just how gay he is and they plan on posting it on the web.  Physical terror and social disgrace … the ultimate bullying weapons.

But Devon has a little something on John and when fellow geek, Becky (Alicia Rose) decides its time to fight back with a little video manifesto of her own … it could be all-out war!
Bonus features include behind the scenes interviews.