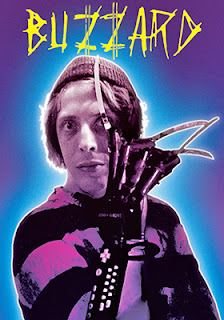 Who knew that the streets, abandoned buildings and the occasional upscale hotel of a decaying Detroit would be a magical sanctuary for a daydreaming smalltime con man.

Oscilloscope Laboratories announced this past week that writer/director Joel Potrykus’ quirky black comedy, Buzzard, will be heading to DVD on Sept. 15.  The ARR is 193 days … the film’s run to date is actually a mix of numerous film festivals (both domestic and international) during 2014 and 2015, plus a brief arthouse showcase run to gather mainstream critical reviews.  The buzz for Buzzard has been good, but now comes the time for a wider audience with the home entertainment release.

Meet Marty (Joshua Burge — Ape), he is bored with his mundane office job.  He’s sort of a bug-eyed younger version of Steve Buscemi, with a knack for coming up with unimaginative confidence schemes. 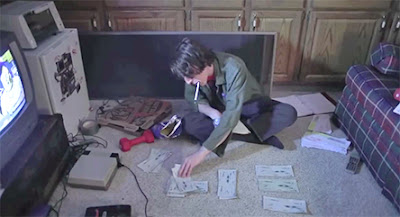 They all seem inspired to him and range from working without actually doing any work, ordering unnecessary office supplies (which are returned for cash) and other near-worthless penny ante cons.   They are time wasting and without much in the way of reward.

But then the BIG con falls right into his lap.   Well, big by Marty’s standards.  His supervisor hands him a stack of returned insurance refund checks and tells him to find out the new addresses so that they can be forwarded. 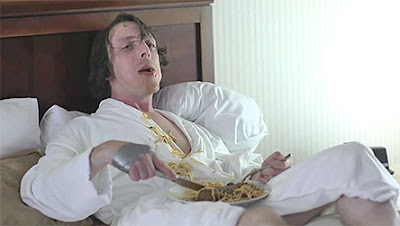 His only friend — and we use the word “friend” loosely — is a co-worker named Derek (Joel Potrykus).   He’s a sad sack too.   And there in lies the path to Marty’s eventual undoing.

After a few days at Derek’s eating junk food and playing video games he snaps.  All of those hidden cameras tracking his check cashing scam.  His paranoia has him convinced that the authorities will be there any moment to scoop him up, so it’s time to take it on the lam.  Hello Detroit!

After a nice set-up — where we get to know and “appreciate” Marty — filmmaker Joel Potrykus takes him on a magical journey to the wasteland of Detroit.  Our hero scurries here and there in sort of a demented Disneyland as a massive police dragnet slowly closes in.   Unhinged and just plain weird … but he does, in the end, find Shangri La!

Bonus features for this one-of-a-kind comedy include the featurette titled “Buzzard at the Locarno Film Festival” and an outtake reel.