Bloody Knuckles On DVD And Blu-ray On Oct. 20 From Artsploitation Films 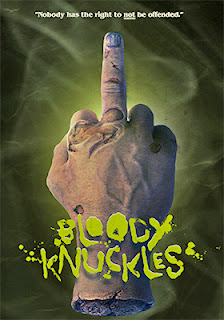 The Beast with Five Fingers meets Idle Hands in writer/director Matt O’Mahoney’s gleeful horror romp, Bloody Knuckles, which will be heading home as both Blu-ray and DVD SKUs on October 20 from Artsploitation Films.

Travis (Adam Boys — Angel of the Skies, Leprechaun: Origins) is the creative force behind “Vulgarian Invasions,” an underground comic book in which he takes great pleasure in offending any and all who cross his path.   When questioned about his lack of restraint — you know, one of those “just because you can, should you” questions — he just shrugs it off.

Well, our boy should have checked in with Leonard Fong (Kasey Ryne Mazak — This Means War, Godzilla), the head of the Golden Dragons crime syndicate, who came across “Vulgarian Invasions” and saw what he believed to be a lampooning of himself (some nasty stuff) in the latest issue. 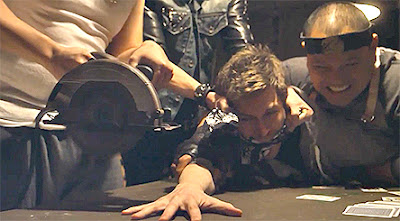 Fong’s a man of action and that doesn’t mean writing a nasty letter to the editor or filing a defamation lawsuit.   Nope, he simply sends out his henchmen, who kidnap Travis and haul him in front of Fong, who then promptly has his drawing hand lopped off with a circular saw.   Message delivered!

Poor Travis, dumped in an alley, his publishing empire at an end and his severed hand banished to the sewers of Vancouver.   But just when all seems lost two things happen that bring “Vulgarian Invasions” back to life.
First, he has a fan-boy in the form of the leather-clad, self-styled gay superhero, Homo Dynamous (Dwayne Bryshun), who was inspired by Travis’ work and would love to set things “straight.”   Secondly, the missing hand is resurrected from the muck and is back with a vengeance — typing out invectives on Travis’ computer.

From then on it is an all-out blood bath and Fong and his Golden Dragons are just meat for the grinder!   Bloody Knuckles is “bloody-good” fun … and will be available just in time for the Halloween-season!!!

Bonus features include cast and crew interviews and a Q&A session.

Email ThisBlogThis!Share to TwitterShare to FacebookShare to Pinterest
Labels: Bloody Knuckles On DVD And Blu-ray On Oct. 20 From Artsploitation Films, DVD and Blu-ray Release Report