Wild Eye Releasing Sets Oct. 27 For The DVD Debut Of The Horror Network 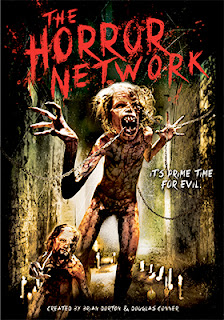 Wild Eye Releasing will be serving up scares aplenty on Oct. 27 — to get you into that Halloween spirit — with the DVD debut of The Horror Network.

This anthology collection features five tales of terror and they’ve been arranged in such a way as to first put the viewer on edge and then to progressively turn up the scare meter all the way up to ten (and beyond)!

The first segment, titled 3:00 AM and directed by Lee Matthews, focuses on Georgia (Charlotte Armstrong), a young woman who is clearly on edge to begin with, is awakened in the middle of the night to a series of nuisance phone calls.  She’s alone and the strange calls are unsettling, but there is something more sinister going within the walls of her dwelling.

This introduction builds atmosphere …  3:00 AM is a warm up! 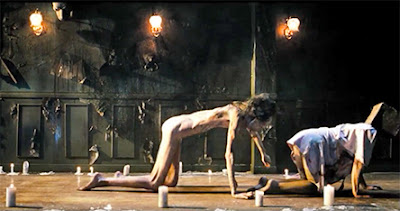 Next comes Edward, directed by Joseph Graham, and featuring Nick Frangione as a disturbed patient with Artem Mishin as Dr. Aleksey, his therapist.  It’s a one-on-one session, with the patient terrified and confused over recent events in his life, while his doctor works hard to uncover the reasons for his patient’s stress.   It’s a cautionary tale … perhaps some secrets need to remain just that, secrets.

Nerves!  If you want nerves on edge, then look no further than the hearing-impaired plight of Alice (Jenni-Lea Finch).   She stars in The Quiet, which shows how quickly a daily routine — in this case, the school bus ride — can come unglued and take one step by step into an alien world of terror.

Fourth in line is director Manuel Marin’s Merry Little Christmas, which is not at all “merry,” but it is a visual — very creepy — feast.

And last we come to the most disturbing of all, director Brian Dorton's The Deviant One.   They say that you can’t judge a book by its cover, but when it comes to creepy neighbors that reek of serial killer mannerisms, perhaps it is best to just say “hi” and decline that invitation to come over to spend some quality time.

The Deviant One, the finale´ to The Horror Network is cringe-worthy and nightmare inducing … and as a bonus, there is an “Extended Cut” (no pun intended) available as a viewing option!