007 Returns In Spectre On Feb. 29 As DVD And Blu-ray Edition Courtesy Of 20th Century-Fox Home Entertainment 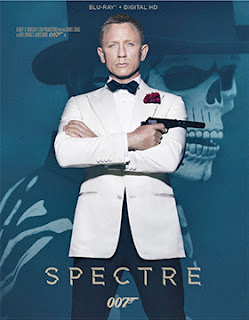 This film sets up perfectly for a sequel, but whether Daniel Craig returns for a fifth outing as Bond, James Bond, is a bit up in the air right now.   Although the film was uneven, Christoph Waltz was a nice touch as long-time 007 nemesis, Ernst Stavro Blofeld.

As to bonus goodies, there are seven featurettes — called “video blogs” — included with both the DVD and Blu-ray SKUs.   Exclusive to the Blu-ray is the featurette titled “SPECTRE: Bond's Biggest Opening Sequence.”

Email ThisBlogThis!Share to TwitterShare to FacebookShare to Pinterest
Labels: 007 Returns In Spectre On Feb. 29 As DVD And Blu-ray Edition Courtesy Of 20th Century-Fox Home Entertainment, DVD and Blu-ray Release Report