Wolfe Tabs Mar. 8 As The DVD Release Date For Writer/Director Jim Hansen's You're Killing Me 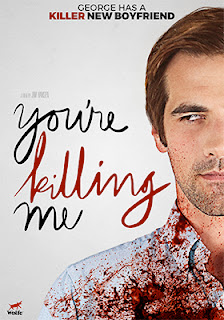 Self-centered George (Jeffery Self — who co-wrote the script) has fallen in love with Joe (Matthew McKelligon — Interior. Leather Bar. and as Jeremy in the Eastsiders series), who has actually been secretly stalking George (he spotted him online in a goofy webcast series).   Now our boy George has many problems, Joe, however, just seems to have one … he’s a serial killer.

Love is blind and the clueless George is more than eager to share his new love with his friends, who take Joe’s blunt honesty as being an active serial killer as something of a joke.

He can’t really be serious?   Gay men are sensitive, right?   He’s as serious as a heart attack, especially when George’s friends begin to disappear!!!   Besides, they needed to be done away with, they’re nosey and irritating. 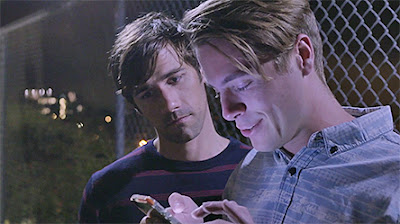 You’re Killing Me is part comedy, part horror tale, part love story, with all of these elements cleverly blended together with a not-so-subtle helping of social commentary; insights.
Too many people live in a world of their own and literally can’t see the forest for the trees.  Even when one of his friends cautions him, “When people tell you who they are, believe them,” George is utterly in the dark about that.

Email ThisBlogThis!Share to TwitterShare to FacebookShare to Pinterest
Labels: DVD and Blu-ray Release Report, Wolfe Tabs Mar. 8 As The DVD Release Date For Writer/Director Jim Hansen's You're Killing Me