VCI Entertainment Preps A Blu-ray Edition Of The City Of The Dead For Delivery On Mar. 29 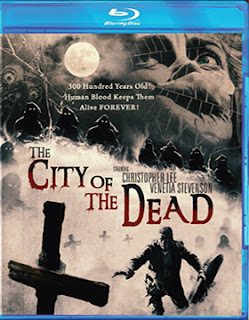 VCI Entertainment announced this past week that director John Moxey’s 1960 horror classic, starring the iconic Christopher Lee, The City of the Dead, will be getting a Blu-ray push on Mar. 29.

Released domestically in 1961 as Horror Hotel, this tale of witchcraft has a 17th Century witch by the name of Elizabeth Selwyn (Patricia Jessel) — who is burned at the stake during the opening prologue — who has returned from the dead to exact her revenge.    She just needs a fresh sacrifice for the forthcoming Candlemas Eve ceremony to continue her reign of terror.

Kindly college professor Alan Driscoll (be suspicious, be very suspicious as he is played by none other than Christopher Lee) sparks the interest of one of his students, Nan Barlow (Venetia Stevenson), into investigating the legend of Elizabeth Selwyn during the holiday break.

So off poor Nan goes to the village of Whitewood — somewhere in New England (but actually one of the last productions to be filmed at the famed Nettlefold Studios in Walton-on-Thames, England … they closed up shop the following year) — where she begins her research, which ultimately leads her to her fate. 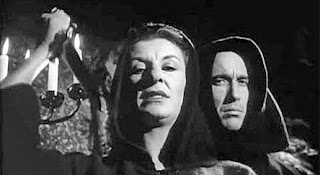 VCI Entertainment will be including both versions of the film with this restored Blu-ray edition — the original British release, The City of the Dead, and the domestic theatrical version of Horror Hotel; the former clocks in with an additional two minutes worth of footage.

Other bonus nuggets are three commentary tracks — the first is a vintage commentary by the late Christopher Lee, the second features director John Moxey and the third is a newly prepared one featuring actor, writer and author Bruce G. Hallenbeck — two vintage video sessions with Christopher Lee are also included here as is one with actress Venetia Stevenson. 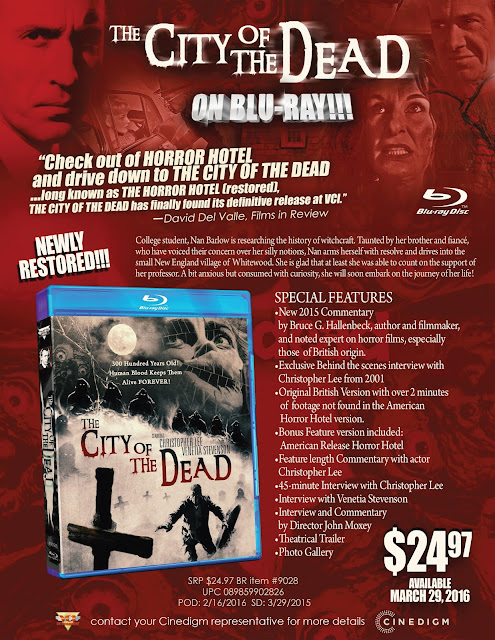 Email ThisBlogThis!Share to TwitterShare to FacebookShare to Pinterest
Labels: DVD and Blu-ray Release Report, VCI Entertainment Preps A Blu-ray Edition Of The City Of The Dead For Delivery On Mar. 29