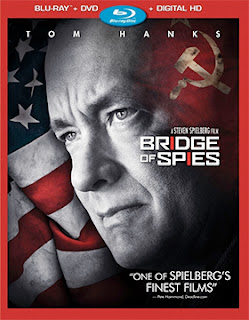 Running a little late to party for the promotion of its Blu-ray and DVD products, Walt Disney Studios Home Entertainment has once again waited until long after retail and distribution outlets had begun taking orders to put forth an official press release for director Steven Spielberg’s Cold War spy thriller, Bridge of Spies.

Perhaps it was a result of CES activities, Star Wars overload or other factors that may have become overwhelming during the Christmas holidays, but Feb. 2 has nevertheless been revealed — officially — as the street date for both DVD and Blu-ray/DVD Combo Pack editions.

The ARR works out to 109 days and the domestic box haul currently stands at $70.3 million.

There are four featurettes included as bonus materials with the Blu-ray/DVD Combo Pack SKU — “A Case of the Cold War: Bridge of Spies,” “U-2 Spy Plane: Beale Air Force Base,” “Spy Swap: Looking Back On The Final Act” and “Berlin 1961: Recreating the Divide”