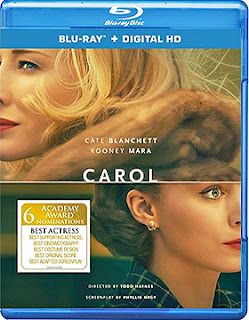 Director Todd Haynes’ Oscar nominated film, Carol, will be getting a Blu-ray and DVD push from Anchor Bay Entertainment on Mar. 15.

Despite six Oscar nominations, including Cate Blanchett for Best Actress in the title role as novelist Patricia Highsmith’s Carol Aird from her 1952 novel, “The Price of Salt,” Rooney Mara for Best Supporting Actress and Phillis Nagy for her screenplay adaptation, plus Oscar nods for Cinematography, Costume Design and Musical Score, Carol has failed to generate much interest at the box office.

As of Feb. 3 the film had pulled in just $11.5 million in ticket sales and is now playing on only 313 screens nationwide.   The attempt to platform for the film didn’t quite work out as planned … in fairness, it did get the Oscar nods (among other award considerations), but the theatre goers these days are attracted to bright shiny objects and films such as Carol can easily be put off to digital downloads.

For the record the ARR works out to an industry average of 116 days. 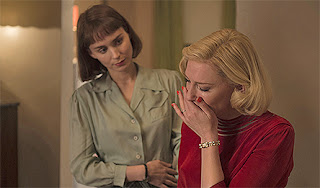 It will be up to Anchor Bay Entertainment to rescue any chances the film has of reaching a wider viewing audience.  The VOD window is 11 days prior to the arrival of the DVD and Blu-ray editions, which could put a damper on sales there as well.

Carol is yet another example of “Hollywood” in crisis these days.   Film producers and distributer either need to increase the price of digital streams or change the windows … or both.   The current model is yielding fewer and fewer viable theatrical hit and consumers are simply taking the least line of resistance to movie viewing when the platforms and incentives are set up in this fashion.

As to bonus goodies, Anchor Bay Entertainment has included a “Behind the Scenes” features and a Q&A video session with unspecified cast and crew members.