Grease Live! On DVD From Paramount Home Media On Mar. 8 It was the WORD; the buzz on Sunday evening Jan. 31.   Would co-directors Thomas Kail and Alex Rudzinski, along with their cast and technical crew, be able to pull off a live performance of Grease.

This wasn’t at some local high school auditorium or at the nearby dinner theatre, but a top-of-the-line production filmed on the Warner Bros. Studios’ back lot and broadcast on Fox nationally — LIVE!   And with a major weather event (60-plus mile-an-hour winds and a torrential downpour) occurring in the Southern California area during the broadcast.

Over 12 million viewers tuned in and, by all accounts, enjoyed every minute of it.   The broadcast was a hit; a smash!

Paramount Home Media announced within 48 hours of the broadcast that a DVD edition will be available for fans to enjoy again — or for those who missed the national live telecast — on Mar. 8. 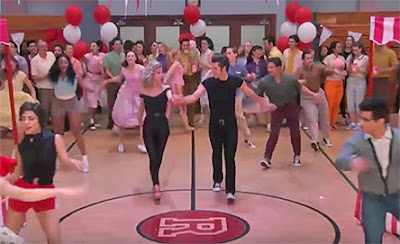 Julianne Hough (Emmy-winning dancer for her work on Dancing with the Stars, plus in such films as Footloose (Ariel), Rock of Ages, Safe Haven, etc.) stars as good girl Sandy, with Aaron Tveit (Les Misérables and as Mike in the Graceland television series) co-starring as Danny Zuko.    The plum role of Rizzo went to Vanessa Hudgens (best known as Gabriella from the High School Musical trio of movies) and as a sweet touch, Didi Conn, who shown so brightly as Frenchy in the original theatrical release of Grease (way back in 1978), does a nice turn here as Vi (Joan Blondell’s character in the original).

As to bonus goodies, Paramount has prepared a behind-the-scenes look at production, which includes cast interviews, plus the featurettes titled “Without a Net: Performing Grease Live!,” “Becoming the “T-Birds” and Pink Ladies,” “Greasin’ up the Joint,” “Be-Bop, Swing and Jitterbug: The Choreography of Grease Live!,” “When Was Your First … ?” and “My Favorite Grease Moment.”