VCI Prepares A Hi-Def Edition Of Screenwriter Dalton Trumbo's The Brave One For A Blu-ray Debut On Apr. 26 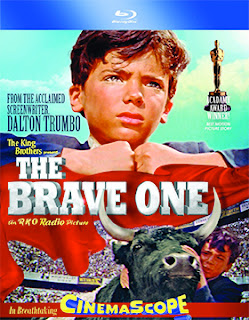 In director Jay Roach’s biopic, Trumbo (currently in theatrical release and heading to DVD and Blu-ray on Feb. 16 from Universal Studios), Bryan Cranston received a Best Actor nomination for his performance as blacklisted screenwriter Dalton Trumbo.

During the course of the film much is made of his “front” submitting scripts to King Brothers Productions, which was headed by Frank King (aka: Frank Kozinsky) — played in the film by John Goodman — a wheeler-dealer that didn’t care one way or another about Trumbo’s communist leanings, his troubles with congress or his blacklisting by the Hollywood Studios.   He like his scripts … it was just business, and besides, Trumbo needed the money and worked on the cheap.

Most of the material that Dalton Trumbo worked on was commercial, B-movie fodder and in the movie he also does numerous “script-doctoring” fixes for Frank King.   Trumbo was fast, inexpensive and very good at what he did.

In 1956, as the story goes, he had this idea for an A-movie script and pitched it to Frank King, who saw gold in what he read and whole-heartedly agreed to produce the film.   All of this true — Trumbo’s blacklisting, his relationship with Frank King and this really terrific idea that he had for a film in 1956.

The film in question was The Brave One, directed by Irving Rapper and written by Robert Rich — legend has it that this was one of Frank King’s nephews — which served quite well as a pseudonym for Dalton Trumbo.    So imagine everyone’s surprise when the film receives three Oscar nominations — one for Best Film Editing, a second for Best Sound and a third for Best Screenplay!

It gets better, Robert Rich wins — there is no Robert Rich to accept the Oscar at the ceremonies on Mar. 27 at the Pantages Theatre in Hollywood (this was the fifth Oscar live telecast).

Dalton Trumbo would eventually be recognized for the Oscar in his own name, plus another one for Roman Holiday in 1953 that was fronted by Ian McLellan Hunter.

Word arrived this past week that VCI Entertainment, taking full advantage of the awareness being generated by Trumbo, has gone to the vaults and prepared a hi-def transfer of The Brave One for delivery on Blu-ray this coming Apr. 26. 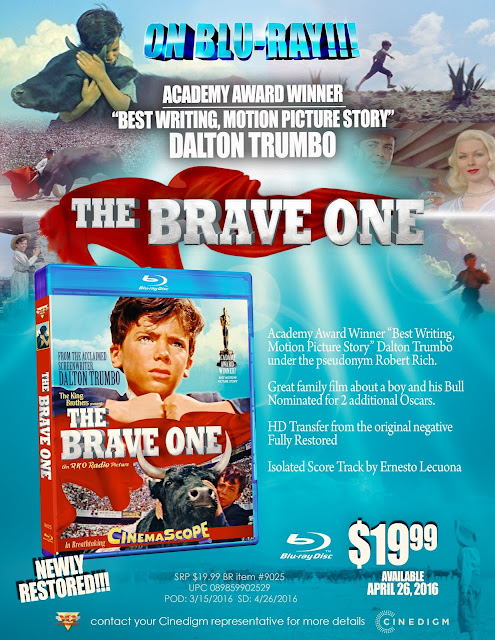 Email ThisBlogThis!Share to TwitterShare to FacebookShare to Pinterest
Labels: DVD and Blu-ray Release Report, VCI Prepares A Hi-Def Edition Of Screenwriter Dalton Trumbo's The Brave One For A Blu-ray Debut On Apr. 26