CJ Entertainment's The Veteran Arrives On DVD On Apr. 5 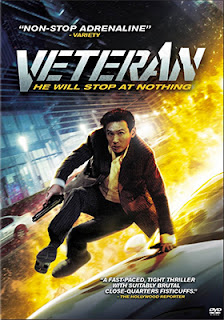 “It’s not a problem until you make it one.”  Is that a warning?  A reminder?  Or, is it just a piece of friendly advice?   You decide, but you are not too far into director Ryoo Seung-wan’s pedal-to-the-metal action comedy, The Veteran, when the answer becomes abundantly clear.

This blockbuster import from South Korea has been given an Apr. 5 domestic DVD release date by CJ Entertainment.  The film, a monster theatrical hit in South Korea, pulled in a very respectable $1.2 million in its stateside run and arrives in the home entertainment market place with an ARR of 200 days.

The streets of Seoul, South Korea are nothing more than the workplace of Detective Seo Do-cheol (Hwang Jung-min — New World, Ode to My Father, The Himalayas, etc.).   He knows these streets well and is quick in his dealings with criminals who would mess with his “workplace.”   That is established early on with a marvelous opening set-piece by filmmaker Ryoo Seung-wan (The Berlin File, The Unjust, The City of Violence, etc.).

Fresh from this big bust, our boy heads over to a local upscale water hole where he runs into bad boy Jo Tae-oh (Yoo Ah-In — The Throne, Sado, Fashion King, etc.), a well-connected playboy (thug, with style) who Seo Do-cheol sizes up as an addict, despite his obvious wealth.   This is going to be easy, he’s an ass, he’s rich and he’s into drugs … but damn, every attempt to bring him down is met with a go-slow warning from his superiors.

Meanwhile, the inside informer who helped our detective with the big car thief bust that opened the film suddenly decides to kill himself.   Is that a red flag or what?   It doesn’t take long for our super sleuth to connect the dots that lead point by point by point right to Jo Tae-oh.

As Sherlock Holmes would say, “Come, Watson, come! The game is afoot,” and so is this high stakes game between Seo Do-cheol and the highly protected Jo Tae-oh … bring him down by finding clever ways to sidestep orders from above!

The Veteran is presented in Korean with English subtitles.

Email ThisBlogThis!Share to TwitterShare to FacebookShare to Pinterest
Labels: CJ Entertainment's The Veteran Arrives On DVD On Apr. 5, DVD and Blu-ray Release Report