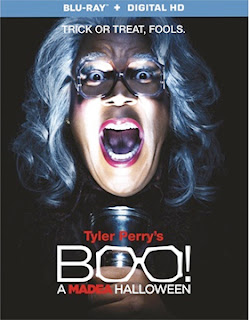 It’s the holiday season and things are bound to fall through the cracks, especially when a major studio delegates their press announcements to an amateurish outside PR firm and the contact person checks out for the rest of the year.   Oops!

Seriously, that is exactly what happened to Lionsgate Home Entertainment and the year-end announcements for two major theatrical hits that will be heading to the home entertainment market place during Q1’17.

Producer and actor Tyler Perry has been a proverbial gold mine for Lionsgate Home Entertainment.   So it came as something of a surprise when his latest smash comedy, Boo! A Madea Halloween, showed up on amazon.com without a press announcement.

Goodness, the film grossed $73.2 million in its domestic theatrical run and you would think that with that sort of box office action — especially when Tyler Perry has his name on it — it would merit the distribution of a formal press announcement.   But, alas, when one delegates such things that bit of basic PR activity can fall through the cracks.   Hey, it happens ... just don’t let Tyler Perry know that you are not putting in the effort to beat the promotional drums for his latest Madea comedy. 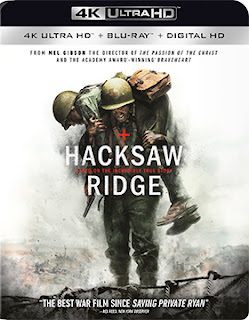 In any case, Jan. 31 will be the street for Blu-ray and DVD editions — no 4K Ultra HD for this one — and that end of January street date yields an ARR of 102 days.
Bonus features include a pair of featurettes — “Why We Love Madea!” and “Boo! From the Crew.”

That’s one, remember we said that there were two major theatrical hits given short shift in terms of an outside PR firm doing their job for Lionsgate Home Entertainment.

The other film is all but certain to get some Oscar action and Lionsgate, with that in mind, has targeted its release date to be retail-ready when the Oscar telecast takes place on Sunday evening, Feb. 26, 2017.   The street date for … drum roll please … director Mel Gibson’s Hacksaw Ridge will be Feb. 21.

This will be a three-SKU array of product offerings — DVD, Blu-ray and 4K Ultra HD editions.   There is one bonus feature common to all three of the home entertainment release selections and it is the featurette titled “Veterans Day Greeting with Mel Gibson.”

Exclusive to the Blu-ray and 4K Ultra HD SKUs are deleted scenes and production documentary titled “The Soul of War: Making Hacksaw Ridge.”