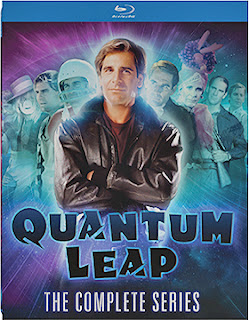 Mill Creek Entertainment announced a 17-strong selection of priced-to-collect DVD and Blu-ray product offerings that will be retail-ready during the month of February.   They arrive in back-to-back release waves on the 7th and 14th of the month.

Leading the charge on Feb. 7 are Blu-ray and DVD sets of Quantum Leap: The Complete Series.   All 97 episodes of the Emmy-winning series starring Scott Bakula as the time-jumping scientist who is trying to get back to the present day.   Bakula is aided by Dean Stockwell, his friend in the present day, who materializes as a holographic image and provides him with important information about his most current time-jumping predicament.

Also on the TV-on-DVD release front on Feb. 7 is 227: The Complete First Season, a double-disc set featuring all 22 episodes from the 1985/86 broadcast season.  The series stars Marla Gibbs (fresh from The Jeffersons sitcom), Hal Williams and Regina King, the Jenkins family who live in the apartment building at 227 Lexington Place (hence the name of the series) in Washington D.C.   Jackée Harry was also a resident of the building and the best friend of Brenda (Regina King), the Jenkins’ teenage daughter (Jackée Harry won an Emmy for Best Supporting Actress during 1986/87 season). 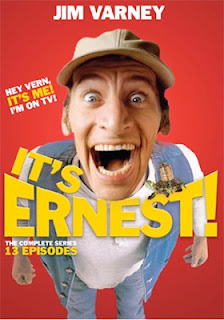 Also on Feb. 7 is the double-disc collection of It's Ernest: The Complete Series, starring Jim Varney as the iconic Ernest P. Worrell.   This Saturday-morning kid show ran for 13 episodes during the 1988 broadcast season (from just after Labor Day right up until Christmas Eve of that year).

On the film-collection release front for delivery on Feb. 7 are three separate multi-film sets.
The first of these is titled the 4 in 1 Latin Love Collection and it contains four films and is priced at just $9.98.   Included in the mix are Living it Up (2000, starring Salma Hayek and Carmelo Gómez), I Like it Like That (1994, with Lauren Luna Vélez, Jon Seda, Rita Moreno and Griffin Dunne), Yellow (2002, teaming Roselyn Sánchez with D.B. Sweeney and Bill Duke) and Passionada (2002, starring Sofia Milos, Emmy Rossum and Jason Isaacs).

Also priced at just $9.98 for deleivery on Feb. 7 is the five-film collection titled 5 Movie Freak Fest.   Featured in this sci-fi themed collection are director W. Lee Wilder’s 1954 alien-invasion thriller, Killers from Space (starring Peter Graves), the 1966 Spain-produced import, Sound of Horror (dubbed in English and released the same year theatrical by Europix … noted for featuring Ingrid Pitt among the cast members) and a trio of Japanese imports (dubbed in English) — Monster from a Prehistoric Planet (1967, featuring Gappa, a fire-breathing cousin of Godzilla), Destroy All Planets (1968) and Attack of the Monsters (1969), both starring Gamera (the flying turtle!). 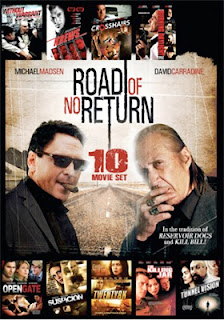 Road of No Return is a ten-film, double-disc collection that is loaded with action and priced to sell (the SRP is just $9.98).   Included in the mix is the collection’s title feature, Road of No Return (2009, teaming Michael Madsen and David Carradine).

These are: American Guns (available on both DVD and Blu-ray) is a 13-part series exploring the history of firearms in the United States (from the Kentucky Long Rifle to the weapons developed for World War I, World War II and Vietnam); American Warrior (two separate documentary series focusing on combat action in Iraq and Afghanistan) are included with this selection — Outside the Wire and Sniper: The Unseen Warrior — and The Evidence for Heaven contains not one, but four programs that investigate biblical stories … these are: The Evidence for Heaven (hosted by Jerry Rose), The Bible's Greatest Miracles: The Proof, Miraculous Messages and End Times: How Close are We. 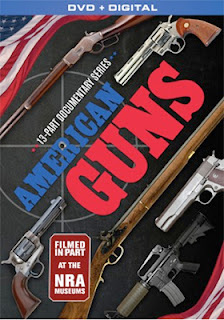 Shifting to Feb. 14, we find two addition DVD releases with the Digital Copy bonus from Mill Creek Entertainment.    These are: the four-disc collection of Liberty's Kids: The Complete Series, with none other than Walter Cronkite as the voice of Benjamin Franklin, and producer Chuck Neff’s SaltRiver Productions presentation of Perfect Sacrifice: When Heaven Comes To Earth, which includes two bonus programs — The Case for Christ's Resurrection and Jesus: The Evidence.

Rounding out the Feb. 14 selections are director 1997 film adaptation of Janice Woods Windle’s historical novel, True Women: The Complete Mini-Series (covering the period from Texas Independence through the Civil War), starring Dana Delany, Annabeth Gish and Angelina Jolie (among others) and the four-film collection titled Life in a Small Town.

Included in Life in a Small Town are: writer/director Tim McCanlies’ 1998 film release of Dancer, Texas Pop. 81; Falling from Grace (1992, with John Mellencamp and Mariel Hemingway); Lone Star State of Mind (2002, teaming Joshua Jackson with Jaime King) and Off the Map.