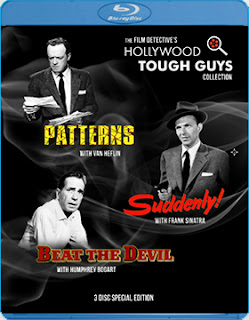 The Film Detective has selected Mar. 28 as the promotional release date for three-disc Blu-ray and DVD launch of the Hollywood Tough Guys Collection.

If you held off buying their Blu-ray film restorations of Patterns, Suddenly! or Beat the Devil — for whatever reason — this will be the perfect time to bounce!  This works out to a buy two-get-one-free promotion.

Included in the mix is director Fielder Cook’s 1956 film adaptation of Rod Serling’s teleplay-turned-theatrical release, Patterns, which has been restored from original 35mm film vault elements.

Next we have director director Lewis Allen’s 1954 film noir political thriller, Suddenly!, starring Frank Sinatra, Sterling Hayden and Nancy Gates.  This too is a restoration from the original 35mm film elements, and it is presented in its original theatrical aspect ratio of 1.75:1.

Rounding out the group is the film restoration of director John Huston’s 1953 adventure/comedy, Beat the Devil, teaming Humphrey Bogart with the likes of Jennifer Jones, Gina Lollobrigida, Robert Morley and Peter Lorre. 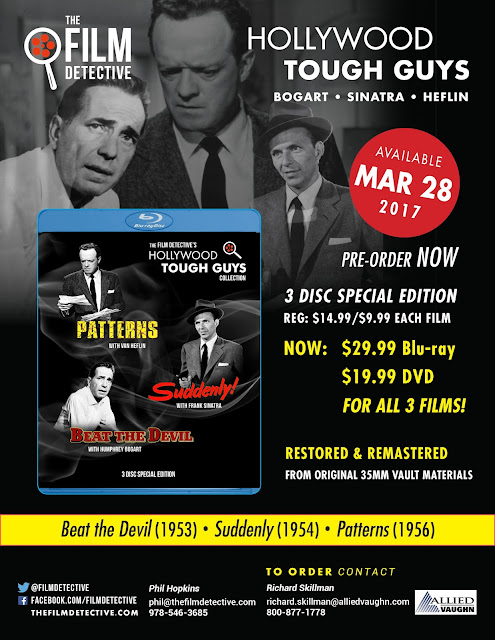