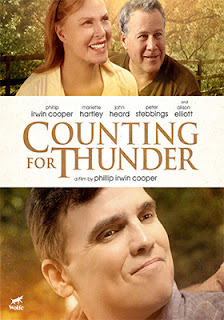 You’ve done it, certainly as a kid, just to see if it were true.   The lighting flashes and the count begins, “one hip-po-pot-amus, two hip-po-pot-amus … five hip-po-pot-amus” and then the thunder (wow, that was close, just one mile away).

This counting exercise between the lightning and thunder serves as a wonderful metaphor for writer/director Phillip Irwin Cooper’s award-winning film, Counting for Thunder.   First the lightning — that bright flash of light — as events in one’s life reach a crossroads, and then follows the anticipation of what comes next … the thunder!

Wolfe announce this past week that Counting for Thunder will be making its DVD debut on May 2.

This autobiographical tale introduces us to Phillip Stalworth (Cooper), a wannabe actor out in Hollywood, who is in a relationship that’s going nowhere — as is his career — when he gets some bad news from back home in Alabama.   His mom (played by Mariette Hartley) has stage four cancer … he packs it in and heads home.   There’s your lightning.

Based on Cooper’s own experiences — a three-year stint back home in Alabama during this particular family emergency — brings a certain intimacy with the material.   He speaks directly to you (the audience) in his narrative, which really doesn’t break the fourth wall, but it is close enough.   You are with him in spirits and it works … you can’t help but take a liking to him as you join him on this life-altering journey back home.

Not only is Counting for Thunder blessed with a marvelous script (real-life can be like), but the film boasts production values well-beyond its 2014 Kickstarter.com origins.   In addition to Emmy-winner Mariette Hartley playing the role of his mother, Cooper also landed John Heard as his father, Alison Elliott (The Spitfire Grill, Birth and most recently in 20th Century Women) as his sister and Peter Stebbings (K-19: The Widowmaker, Re-Generation, and as Cardinal De Luca in The Borgias and as Alvin in The Listener television series) as an “old” acquaintance whose friendship brings more “thunder” to his life.

Counting for Thunder is an excellent slice-of-life tale that is well-worth discovering come May 2. 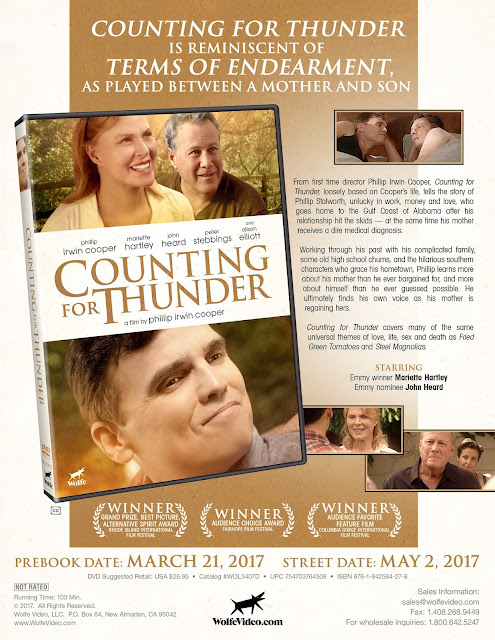 Email ThisBlogThis!Share to TwitterShare to FacebookShare to Pinterest
Labels: DVD and Blu-ray Release Report, Wolfe Sets May 2 For The DVD Debut Of Writer/Director Phillip Irwin Cooper’s Counting for Thunder