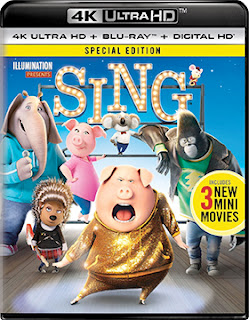 Universal Pictures Home Entertainment announced this past week that they will be bringing home the bacon — that is, a four-SKU array of home entertainment product offerings — on Mar. 21 for the directing team of Christophe Lourdelet and Garth Jennings’ animated smash, Sing.

The ARR comes in at a very-quick-to-market 88 days and ticket sales currently stand at a sizzling $265.4 million.   With that level of box office performance it was only natural that a sequel would be planned for release … expect Sing 2 during the Christmas season of 2020.

As to the home entertainment launch of Sing, Universal has planned a stand-alone DVD edition, a Blu-ray/DVD Combo Pack, a double-disc 3D/2D Blu-ray SKU and a 4K Ultra HD/Blu-ray Combo Pack. 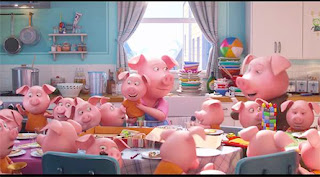 Also making the move to home entertainment is director Baran bo Odar’s Sleepless, starring Jamie Foxx as Vincent, a Las Vegas undercover cop, who has the night — and case — of his life when the focus of his attention turns to rescuing his son from certain death after he, Foxx, does something beyond stupid.   DVD and Blu-ray/DVD Combo Pack editions will be available on Apr. 18.

The ARR for Sleepless is 95 days and ticket sales from the film’s mid-January theatrical launch currently stand at $20.1 million.

Bonus features include deleted scenes and featurette titled “One Long Night: The Making of Sleepless.”