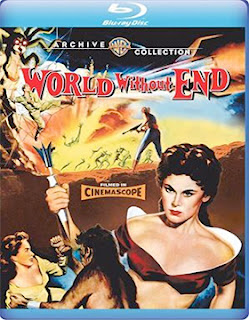 This Technicolor gem features Marlowe and Taylor, along with Nelson Leigh and Christopher Dark, as four astronauts on a return flight from a look-see at Mars.   They are caught in a meteor swarm and their spacecraft accelerates to a speed that what we would come to know as “warp” speed (thank you, Star Trek) and is catapulted forward in time to the year 2058.   They survive a harrowing crash-landing on an unknown planet, which they later discover to be their own planet Earth after an atomic Armageddon.

Exploration leads them to encounters with giant spiders and Neanderthal-like mutants … and to a mysterious underground city populated by beautiful women, including Nancy Gates, Shirley Patterson (It! The Terror from Beyond Space) and Lisa Montell (She Gods of Shark Reef).  The men are weaklings and it is just a matter of time before the mutants gain entrance and destroy the last vestiges of pre-war civilization! 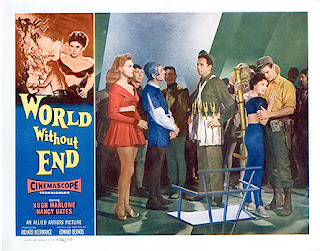 Warner Bros. Home Entertainment announced this past week that actor/director Ben Affleck’s film adaptation of Dennis Lehane’s “roaring twenties” crime novel, Live by Night, will be available on Mar. 21 as both DVD and Blu-ray product offerings.

The ARR comes in at 88 days and domestic ticket sales from the film’s Oscar-qualifying theatrical run were a disappointing $10.3 million. 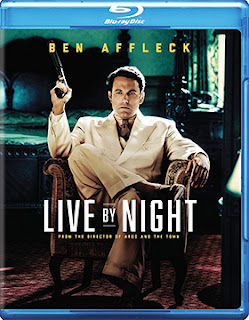 The theatrical launch of Live by Night is yet another example of the old standby of the “platform” theatrical rollout is no longer working in today’s digital environment.

The film opened Christmas day in just four theatres (Oscar qualifying), which signaled to critics that this was an important film.   It played for two full weeks at this level and then on Jan. 13 jumped to just over 2,800 screens nationally.   During that two week period the major metro film critics roasted the film and by the time it opened to a national audience word was out and no one cared.   If you are going to open a big budget film — this is a gorgeous period film — it has to go wide, wide, wide on day one (at least 3,500 screens).

As to bonus goodies, common to both the DVD and Blu-ray SKUs are deleted scenes with commentary.   Exclusive to the Hi-Def release are commentary by actor/director Ben Affleck and four featurettes — “Angels with Dirty Faces: The Women of Live By Night,” “The Men of Live by Night,” “Live by Night’s Prolific Author” and “In Close Up: Creating a Classic Car Chase.”