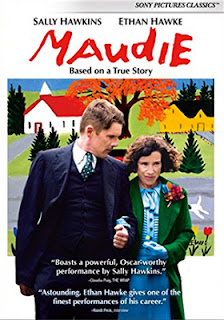 Irish filmmaker Aisling Walsh has taken a script from Canadian producer/writer Sherry White, recruited Sally Hawkins, an English actress, and Ethan Hawke, an American, to spin a biopic about a Canadian artist that many Americans might not be familiar with (she’s been dead for 47 years).   The result is one of the best films of the year.

The film in question is Maudie, which will be making its way to DVD and Blu-ray on Oct. 10 courtesy of Sony Pictures Home Entertainment.   The film’s limited theatrical run generated ticket sales of $5.6 million … the ARR comes in 179 days.   This is one to be caught on DVD … and come awards season it may get a second wind when people begin to discover it.

For those not familiar with Maud Lewis (nee Dowley), she was a self-taught artist who eked out a living with her paintings and illustrated greeting cards.  Much of her fame came after her passing … and Hawkins’ script and Walsh’s film presentation do not indicate that you are watching a biopic, but rather a heartfelt story of two very unlikely people finding happiness.

Sally Hawkins, who was nominated for a Best Supporting Actress Oscar for her performance in Woody Allen’s Blue Jasmine, absolutely shines as Maud (a Best Actress nomination is certainly possible for her performance here), a plain woman, suffering from early onset rheumatoid arthritis, who has no outward skill set.   She lives with her aunt (played by Gabrielle Rose) after her brother disposed of the family home, leaving her destitute. 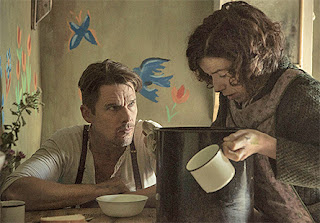 It is the depression and it is clear that this near crippled young woman has little in the way of a future.   By chance she answers an advertisement from a gruff fishmonger named Everett Lewis (Ethan Hawke), who was looking for a housekeeper (the house is so small that you wonder what that was all about).

That’s the set up, what follows is an odd love story (with some poetic license taken) that is set in remote Nova Scotia — an unlikely couple, an unlikely artist, but a marvelous film emerges from these bleak prospects.

As to bonus features, there are deleted scenes and a pair of production featurettes — “Inside Story” and “Director’s Look Book.”