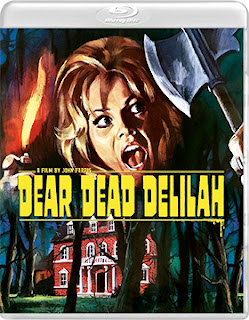 This new 2K restoration, from 35mm vault elements, will be available as a Blu-ray/DVD Combo Pack.

Make no mistake, Luddy (played by Patricia Carmichael) hacked her mother to death (a graphic prologue … a teaser of things to come) and has spent the last 25-years in a nut house.   Call it unfortunate, or happenstance, or just wrong place/wrong time, but she ends up in a minor accident and comes under the care of Richard (Robert Gentry) and his wife Ellen (Elizabeth Eis), who insist on taking here to their estate, South Hall.

OK, the transition is a little clumsy, but once Luddy settles in at South Hall, things kick in.   We meet Delilah (Moorehead), who enjoys tormenting her family with a stack of hundred dollar bills — their dead father’s “horse” money.  If they can find it on the sprawling estate, the money is theirs. 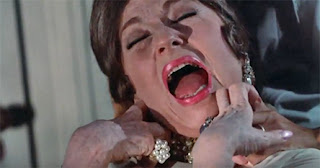 Meanwhile, Richard (Delilah is his aunt) and Ellen learns of Luddy’s backstory and the kindly Ellen assures her that what is past is past.   Luddy conveniently becomes the housekeeper and all is right with the world … oh for about five minutes.

The heirs to the “horse” money (something like $600,000) start meeting grisly deaths, which all point, of course, to the unhinged Luddy.   Or maybe it’s Alonzo (Dennis Patrick), one of Delilah’s brothers, who fantasizes that Luddy might be his long lost daughter … he’s a secret drug addict, so sure, it’s plausible that he’s the killer. 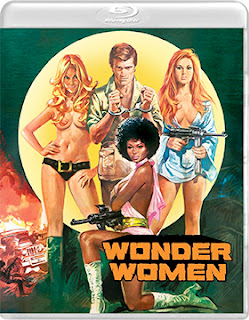 You’ll have to wait until Aug. 28 to find out whom the deranged killer is … with this family, it could be just about anyone of them!!!

Bonus goodies include the featurette titled, “Family Secrets: The Making of Dear Dead Delilah,” which is a video session with filmmaker John Farris (his only film, author of such books as “Harrison High,” “When Michael Calls” and “The Fury,” which he adapted for screen with Brian De Palma directing in 1978).