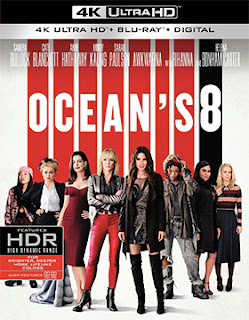 At first glance the idea of an all-female “Ocean’s” caper sound pretty much like a female Ghostbusters.   Why?   But on a closer look the name Sandra Bullock jumped out … if she is attached to it, well, bring it on.   She’s whip-smart when it comes to managing her career!

Warner Bros. Home Entertainment announced this past week that a three-SKU helping of director Gary Ross’ Ocean's 8 will surface on Sept. 11.

The ARR comes in at 95 days and box office receipts were an impressive $137.3 million … another installment in the series is certainly possible.

Planned for delivery to the home entertainment marketplace on that date are a stand-alone DVD edition, a Blu-ray/DVD Combo Pack and a 4K Ultra HD/Blu-ray Combo Pack presentation. 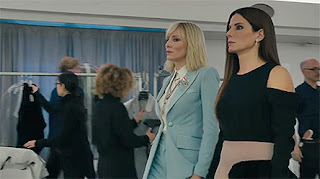 Debbie Ocean (Sandra Bullock), the younger sister of the now-deceased Danny Ocean — not to be confused with Danny’s ex-wife, Tess (Julia Roberts) — is fresh out of prison and assembles an all female crew to exact revenge on a shady creep named Becker (Richard Armitage), who framed her, which led to a five-year prison jolt.

New Ocean; new crew … and another fantastic caper.  The idea is to steal the Toussaint, a diamond necklace worth something like $150 million dollars, break it up and plant some of the diamonds from the piece on Becker … easy!

Bonus gems include deleted scenes and a trio of featurettes — “A Heist in Heels,” “Ocean’s Team 3.0” and “Reimagining the Met Gala.”