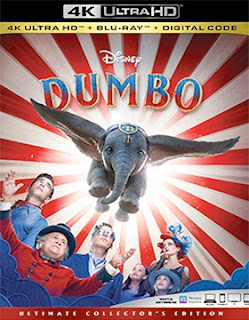 Way, way back in the spring of 2000, Britney Spears had a number one hit single titled “Oops! … I Did It Again.”

That was 19 years ago, but it might just be the theme song for today’s “Big Box” retailers when it comes to their order-taking activities.

Sing-a-long … “Oops! … I Did It Again” … “I jumped the gun on taking orders for Dumbo!”    Target and Best Buy like to get in early on announcing the release of new theatrical titles for delivery to the home entertainment marketplace and grab their “fair” share of the release pie … and that’s before the studio in question can officially put out the word.

The latest “Oops” is a pre-order push for director Tim Burton’s $170 million film production of Dumbo, which both of these big box retailers are currently in the process of taking orders for with respect to their exclusive “special edition” 4K Ultra HD/Blu-ray Combo Pack editions.   They say these will be available on  June 25.

Walt Disney Studios Home Entertainment, of course, hasn’t officially announced the title as of yet.   But with the deck stacked against them — the Disney Store and its mega-list of “in-house” customers — you can hardly blame Target and Best Buy for acting in their own best interests in ignoring any embargoed announcement protocols. 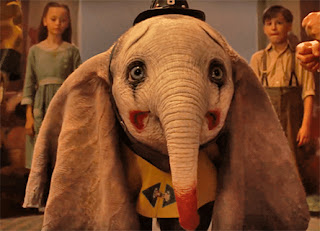 Just three weeks ago both retailers did the exact same thing with Captain Marvel.  They said June 11 was the street date.   The PR department over at Walt Disney Studios Home Entertainment didn’t get around to confirming that date until this week.

Target and Best Buy were correct in saying June 11 was the street date for Captain Marvel, so we are once again going to take their word for it when it comes to Dumbo being released on June 25.

So, with that said, June 25 will be the street date for a three-SKU helping of filmmaker Tim Burton’s live-action update of the 1941 animated classic … Combo Pack editions for both the 4K Ultra HD (with Blu-ray) and Blu-ray (with DVD) formats, plus a stand-alone DVD edition will be the release mix.

The ARR works out to just 88 days and domestic box office receipts currently stand at $109.8 million.

Since this is a defensive order-grab on the part of these “big box” retailers and the official word from Disney has not been circulated, there is no information available as to any bonus features.   That will come in time (if the timing follows that of Captain Marvel, expect a formal press announcement in two to three weeks from Walt Disney Studios Home Entertainment for Dumbo).

Email ThisBlogThis!Share to TwitterShare to FacebookShare to Pinterest
Labels: DVD and Blu-ray Release Report, Oops They Did It Again — Big Box Retails Out Early With Pre-Orders For Walt Disney Studios Home Entertainment's Dumbo On June 25