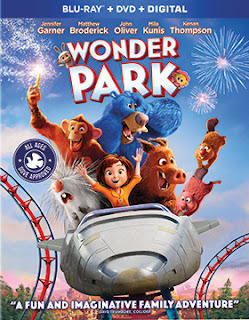 The Paramount Animation and Nickelodeon Movies production of Wonder Park will be available for families to enjoy again and again in the home entertainment universe on June 18.

The ARR works out to 95 days and multiplex ticket sales came in at a nice $45.2 million.

Planned for release are a stand-alone DVD edition and a Blu-ray/DVD Combo Pack presentation.

June (voiced by Brianna Denski, a young musical theatre actress who competed with roughly 1,500 other young girls for the role) and her mother (voiced by Jennifer Garner) play for hours in an imaginary world of their own special creation called Wonderland, where all they have to do is imagine it and it all comes true.

This special place is run by adorable animals, including the official Wonderland “greeter,” a blue-colored bear by name of Boomer (voiced by Second City stand-up comedian Ken Hudson Campbell) and the park’s manager, Peanut (voiced by Norbert Leo Butz — as Kevin Rayburn from the Bloodline Netflix series), a chimpanzee who reacts to June’s mother’s voice and immediately creates the rides and attractions that mother and daughter conjure up.

Other members of the park include the maintenance staff of Gus (voiced by Kenan Thompson) and Cooper (voiced by Ken Jeong), who are brothers (and beavers), a porcupine by the name of Steve (voiced by writer-turned-actor John Oliver — 13 Emmy Awards nominations for writing, with seven wins for Last Week Tonight with John Oliver and The Daily Show) runs park security and Greta (voiced Mila Kunis), a wild boar who Steve has a crush on.

When June’s mom takes ill and has to go to the hospital, her father (voiced by Matthew Broderick) is overwhelmed and packs up June and sends her off to Math Camp.   While riding on the bus, she impulsively decides to “escape” and return home to her father while mom recovers, but quickly gets lost in the woods. 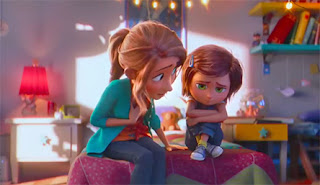 This is where Wonder Park takes off and the fun and adventures begin.   June discovers a rundown and abandoned version of Wonderland hidden in the woods.   It is there that she hooks up with Boomer, Gus, Cooper, Steve and Greta, but Peanut is missing.  To make matters worse, her new friends are being terrorized by an ever-growing population of “Chimpanzombies” and a “darkness” has settled over what was once a fun and magical place.

It doesn’t take long for June to piece it together, she is the cause of the darkness — her despair over her mother’s illness — and the solution is to find Peanut, restore order and get things humming again.   And maybe, just maybe the zombie chimps will be gone, the darkness lifted and Wonderland back to being a place loaded with magical rides and marvelous times.

Remember, Wonder Park is an animated kid’s film, so June’s mom will get well and by the final frame June will have overcome all of the obstacles thrown in her way — even those of her own making. 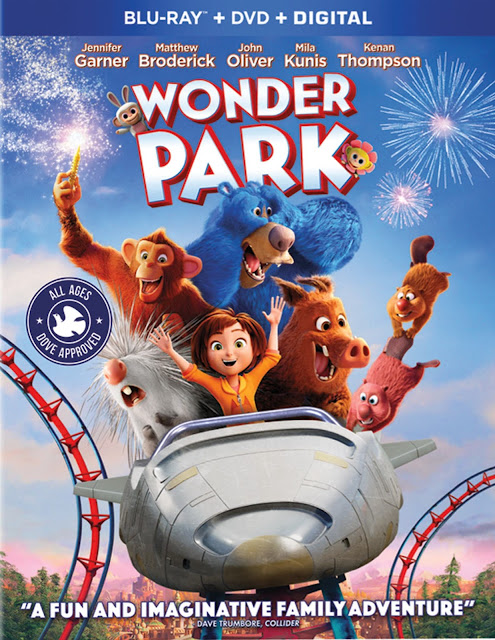 Email ThisBlogThis!Share to TwitterShare to FacebookShare to Pinterest
Labels: Paramount Home Media Looks To June 18 For The Home Entertainment Launch Of Wonder Park