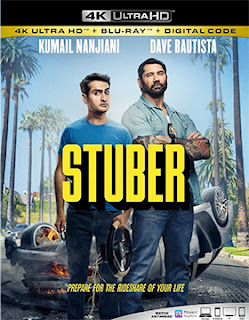 The ARR comes in at 95 days, but the mid-July launch of this comedy teaming Kumail Nanjiani (The Big Sick), as an Uber driver, with former WWE Tag-Team Champion, Dave Bautista (as Drax in Guardians of the Galaxy Vol. 2, Avengers: Infinity War and Avengers: Endgame), who plays a Los Angeles Police Detective out to revenge his partner’s death (but can’t drive over eye issues), didn’t generate the box office excitement that was expected … just $22.4 million in ticket sales.

Available for consumers on Oct. 15 will be Combo Pack selections for both the 4K Ultra HD (with Blu-ray) and Blu-ray (with DVD) formats, plus a stand-alone DVD edition.

As to bonus goodies, filmmaker Michael Dowse and actor Kumail Nanjiani team up for commentary, plus there is a gag reel, deleted scenes, the featurette titled “Georgia Film Works” and an interactive feature titled “Joke-O-Rama.”