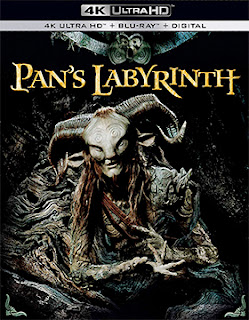 The rumors that were floating around about week ago are true.   Warner Bros. Home Entertainment has been working on a 4K re-mastering of director Guillermo del Toro’s 2006 Best Foreign Language Oscar-nominee, Pan’s Labyrinth (Oscar wins for Art Direction, Makeup and Cinematography) and now we have the confirmation as to the street date for the release of a 4K Ultra HD/Blu-ray Combo Pack edition.

The retail-ready date will be Oct. 1.   This is the third 4K Ultra HD/Blu-ray Combo Pack being released by Warner Bros. Home Entertainment on the first day of October.   Already in place are director Joe Dante’s Gremlins: 35th Anniversary Edition and director Stanley Kubrick’s The Shining.

As to bonus materials, filmmaker Guillermo del Toro provides commentary on the 4K Ultra HD disc.    The accompanying Blu-ray disc also includes commentary, plus a video introduction by del Toro and four featuettes — “The Power of Myth,” “The Faun and the Fairies,” “The Color and the Shape” and “The Director’s Notebook.”